Lights!
I ordered some bright white LEDs to see how they work as lighting. Made an array of 7 of them and replaced the driver’s interior light…pretty bright, but I think I’ll add a few more bulbs and more diffusion 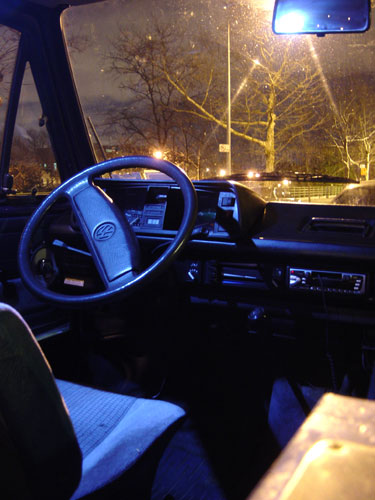 Juice!
Got the solar panel mount finished. It’s a sheet of plywood with two 2×3 cross-pieces. The one with the notches will be held to the rear luggage rack bar with u-clamps so it can serve as a pivot to set the panels up at a good angle. The other one will be attached to the front bar, but behind rather than on top of it, so the wind pressure will push down on the panels rather than tearing them from the roof, though I don’t intend to drive long distances/high speeds with them up there anyway. The wooden frame is covered with spray-on truck bedliner to prevent rot, and there’s industrial carpet between the panels and plywood for padding.

Instruments!
I’ve been dealing with the lack of instrument lights for too long, so I dug into the dash.

How to disassemble the Vanagon instrument panel:
Reach around the windshield-side of the plastic cover over the instrument panel and find the two grooves. Pull toward you and it will pop off. Then there are 4 screws holding the instrument assembly to the dash. The two nearer the windshield are easy. Of the other two, the left one wasn’t accessable until I unplugged a wiring harness, and the right one was hidden until I removed the hazard light and defroster switches (pinch the clips on either side of them and rock them out).

Another wiring harness comes off the right side (just rock these off), and then there’s the speedo cable. Feel around behind the speedo for the cable; there’s a pretty obvious retaining clip dealie you pinch to disconnect.

I spent about 30 fruitless minutes trying to find the failure; the bulbs were good, they made good contact with the flexible circuit board, and everything else on there worked fine. I ended up running a red wire directly from the “out” post of the dimmer to one of the bulbs, which completed the circuit for all 3. There’s just too damn much spaghetti in too tight of a space to mess with until I have a better reason to tear the whole thing apart.

Music!
The radio had been bothering me too – some bastard wired it up properly…I hate that! I want to be able to use it regardless of the state of the ignition switch, so I ran the main power wire to an always-on fuse box connection that already held the other power wire, that keeps the clock and presets when the car is off. Eventually this will live on the second battery’s circuit, along with all interior lights and some cigar lighter plugs for doodads like the sink pump and 12v vacuum cleaner.

Speaking of interior lights – I found a small flourescent light at Home Labyrinth for $11 that takes 8 AAs, meaning it’s 12v. Not as nice as the stock Westy ones, but at 1/5 the price I’m not complaining. It’s the middle one in this (sloppy) panoramic. The rear one is stock and the front one is the LED dealie detailed above. You can also see two of the new curtain rods in this pic.

Cabinetry!
OK, it’s not electrical and actually happened last week, but anway…spotted a set of drawers put out for ‘big garbage day’ that was pretty close to the size I needed for the left-side cabinet. Trimmed a few inches off the back, put on latches and handles, and drilled holes to bolt it to one of the middle seat mounts on the bottom and to the holes for the side trim panel. The top is exactly the right size to hold my Coleman stove, which fits inside it behind the drawers – the last few inches of the top now lifts off to access that space. Eventually I’ll build something nicer, but it’s great for now and like everything else it can be removed/installed in a few minutes. 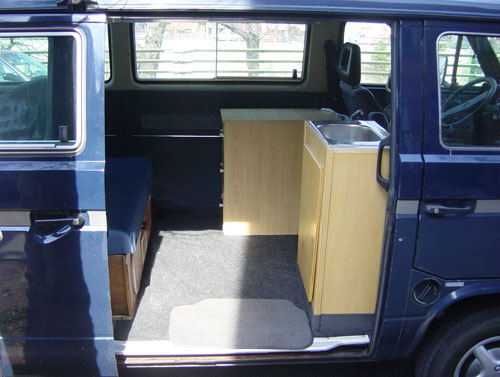