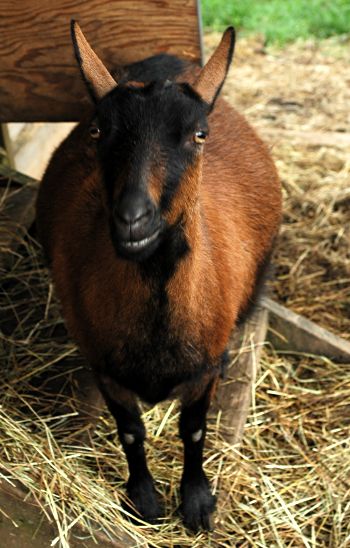 Our Aberdeen is getting ready to bring her next generation of kids into the world. These photos were taken about two weeks ago, and – if you can believe it – she's now even bigger! Her udder has been filling for a couple of weeks, and today I've noticed that she seems a little more restless than usual.

Gestation in goats can vary between 145 and 155 days, with 150 days considered the norm. Last year, Aberdeen kidded at 148 days. She is currently at 145 days, and Peter and I both think she's not going to wait too much longer. I'm guessing that we'll have new little goat babies by Tuesday!

Look at the size of her – I'm hoping she only has two in there! 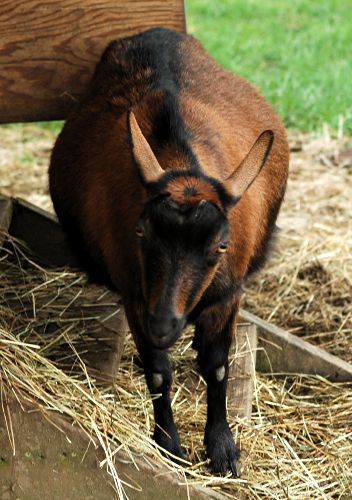 Just for kicks, here's a shot of Peter giving treats (er, weeds) to last year's babies (now yearlings). From left to right: Nikabrik (the only boy), Lulu, Zoe and Inara. 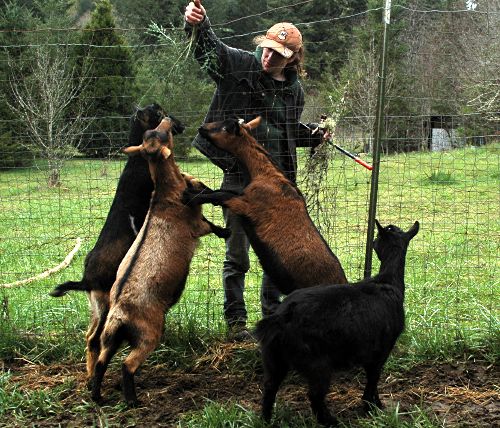 And, because it wouldn't be right to leave them out (and because they're just too darn cute), I have to include a shot of Drama Queen and Koko. 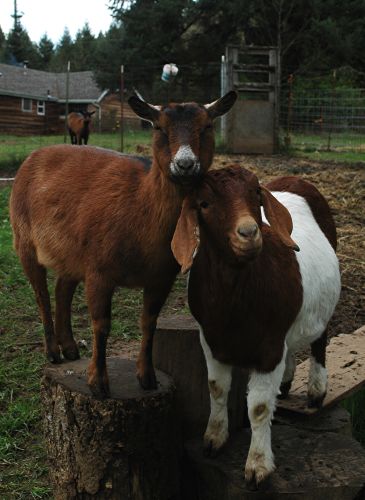 Unlike Aberdeen, Drama is not in the family way. We didn't breed her in the fall due to a recurring staph infection on her udder; after two rounds of Penicillin and still no relief, we wanted to give her body a break.

What finally seems to have done the trick (fingers crossed)? Grapefruit Seed Extract, which you can find in any health food store. It's been shown to have antibiotic and antimicrobial actions – I've used it myself to guard against "traveler's diarrhea" while in India, and more recently, when a flu-like virus turned into what appeared to be some kind of bronchial or respiratory infection. It hadn't occurred to me to try it with Drama, until we were faced with having to move her to a stronger antibiotic (with more potential side effects and more potential damage to our soil). I saw the bottle sitting on a shelf, did a little research to find that it is indeed used for both pets and livestock, and figured we had nothing to lose by giving it a try.

I guesstimated a dosage (6 drops daily, based on her weight – 3 drops mixed in with her morning snack and 3 with her afternoon snack), and also mixed it into an herbal salve I'd been putting directly on her sores. We continued this for several weeks, until all of the sores had been healed and gone for at least two to three weeks. Then we weaned her off of it – going down to two drops per feeding for a few days, then one, then none.

So far (knock on wood), we've seen no sign of her sores reappearing. So this past Monday, when she went into heat, we finally allowed her to be bred. If she took she'll be due in early September, giving us the gift of year-round fresh yummy goat milk. Go Drama!

This time from the front, the cuteness that is Inara: 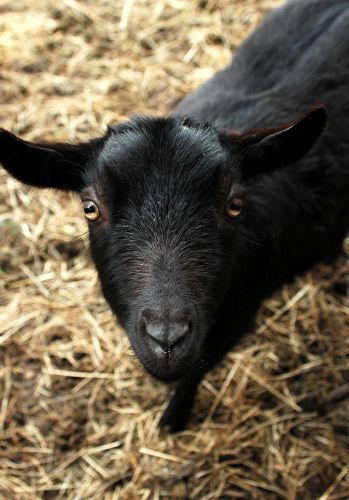 Last, but definitely not least, we've received so many nice comments on this blog lately, both here and via email, and I just want to say thank you. We've enjoyed and appreciated each and every one. If you've contacted us recently and not yet gotten a response, please know that we're not ignoring you! It's been an incredibly busy time here lately, but we will be responding to every email as soon as we get the chance.

We'll be back with news from Goatlandia very soon, along with an update on the many recent happenings in Chickenville. As always, thanks for reading.