I’ve been out enjoying my VW more often lately as weather and mechanical dependability have improved. Last weekend, it was suddenly 60 degrees out, and I took the Best Woman Ever and the Best Dog Ever to the country. The Mr Heater Buddy did a great job keeping us warm at night (but never, NEVER sleep with one of these – for that you need to go to a $400 RV furnace…someday)

I’ve had an annoying sound coming from under the passenger side, toward the rear of the sliding door. I suspected the fuel pump just because of location, and someone on thesamba.com confirmed this; the fuel pump was struggling with a clogged filter. I replaced the filter and the noise went away, and idle seems a little bit smoother, but the rust in there meant that I’ll have to pull and clean the fuel tank at some point. Until then, new filters are only $5 and I’ll keep a used fuel pump around as a spare.

Made some nice progress on the sink cabinet. My carpentry skills are rather primitive and I’m using plywood, so iron-on laminate edging will be needed for a finished look, but I’m pleased so far. Used self-stick floor tile for the top around the sink.

Note: aerosol polyurethane might sound very convenient, but when you have to wash your hair 20 times before going out on a Saturday night because it’s matted together with goo, you see the downside. Brushes and cans for me from now on.

Anyway, here’s the sink unit. The door will have invisible thingies holding it on for a clean look, and will double as a dining table when removed: 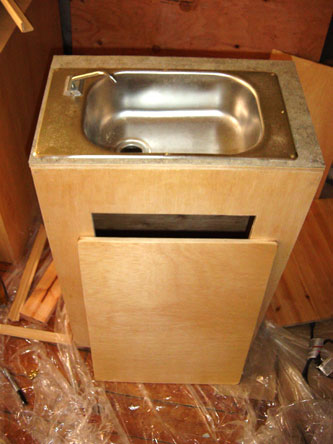 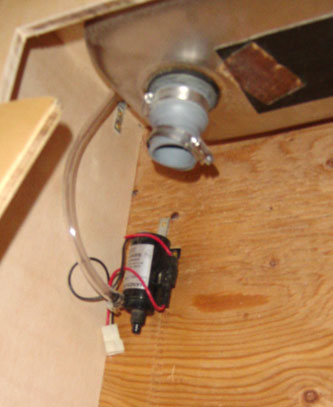 I think I’ll move the pump down to the level of the freshwater tank (which will live in the bottom of this cabinet) so it will always be primed; I don’t know if it can tolerate running dry. I’ll probably go with toggling pushbutton switch, though I’m tempted to make a simple controller that will give you ten seconds of water for each press, in the interest of conservation. I don’t want to carry a lot of water around, it’s heavy.

Gray water tank will ride between the beams under the sliding door. Making the drain hookup removable without ugly holes in the floor when in a non-camping configuration will be a challenge. I’m tempted to run it through the passenger seat pedastal, but hesitate because that’s where the main battery lives. For ease of connection and “my parents grew up during the depression and I heard all the stories” thriftiness, I’ll use garden hose for the drain. For a p-trap (that curve under the sink that keeps smelly air from rising up through the drain), I’ll just loop the hose with a zip tie. This will also enable me to run the line wherever I want, maximizing storage area under the sink. A nice piece of wood from an old Ikea coffee table will be transformed into a hinged cover for the sink, so it can serve as counterspace when not in use.

Finally, after a weekend eating from old take-out containers, I bought something silly that nevertheless gives me a smile: 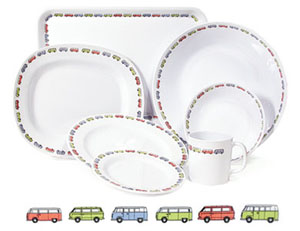