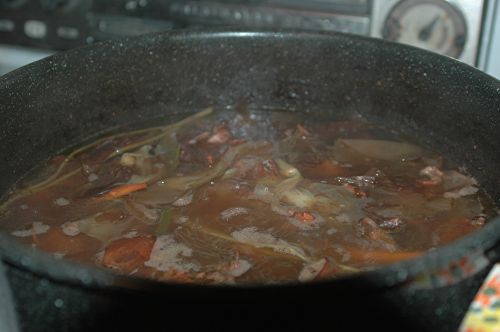 This GIANT pot of stock is simmering away on our stove. Yes, that is our (guesstimate: 3 gallon) water-bath canning pot – it was the only one large enough to hold all of the bones and veggie scraps I had accumulated.

In this pot are: chicken carcasses (our own chickens), chicken feet (our own chickens), random chicken bones from random dinners (not our own chickens), beef bones, pork bones, scraps/skins/ends from all the veggies we’ve eaten over the past month or so (onion trimmings, onion skins, garlic trimmings and skins, leek greens, carrot ends, kale stems, basil stems, onion greens from the onions in the garden that the chickens tried to kill, and whatever other veggie scraps I deemed it necessary to save at the time – all saved in a ziploc bag in the freezer, until such time – like now! –  as I was ready to make use of it), and saved (frozen) cooking water from previous steamed veggies (kale, onions, etc).

And on the other burner, for tonight’s dinner: quinoa simmering in previously-preserved chicken stock (from our own chickens), to be served on a bed of fresh salad greens from the farmer’s market and topped with the leftover pesto from yesterday’s dinner (basil from the farmer’s market, onion greens from the garden, garlic from winter storage, local hazelnuts from winter storage, homemade goat milk feta, and olive oil.)

ETA: I forgot – the stock also contains several eggshells (from our chickens), a good dose of apple cider vinegar (it helps draw the minerals out of the bones and eggshells), and a couple of corn cobs for added flavor. It’s still simmering away, after about 20 hours! Soon I’ll strain it out into jars to cool. As it cools, the fat will rise to the top – if there’s a good amount of fat, I’ll scoop it off into another container to use as a cooking fat (otherwise I’ll just leave it as is). Then into the freezer the jars will go, just waiting to be pulled back out for some future meal! 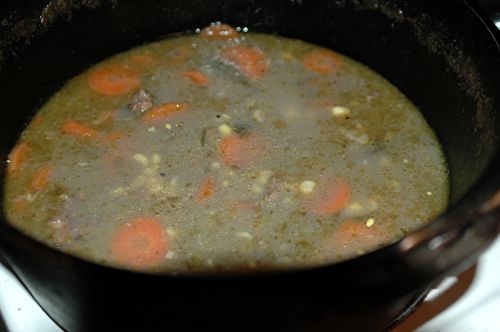 It’s finally getting warm enough that we’re only using the wood stove for a quick fire in the mornings now, just to take the chill off. But during the winter, with the fire always going, we were able to cook the majority of our meals on our wood stove.

Oh, I’m not complaining about the warmer weather – I’m ready for it – but cooking on the electric stove just isn’t the same… 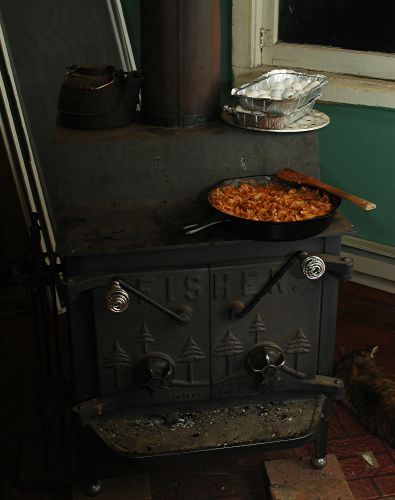 Goulash, made with Deck Family Farm ground beef and our own canned tomatoes from last summer’s garden (the eggshells on the top level are drying for future use as chicken supplements and garden nutrients). 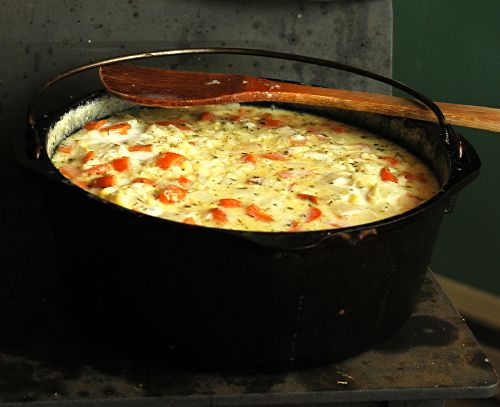 Corn chowder, made with our own fresh goat milk and goat cheese, and our own frozen corn from last summer’s garden. The carrots are from Horton Road Organics, a local farm. 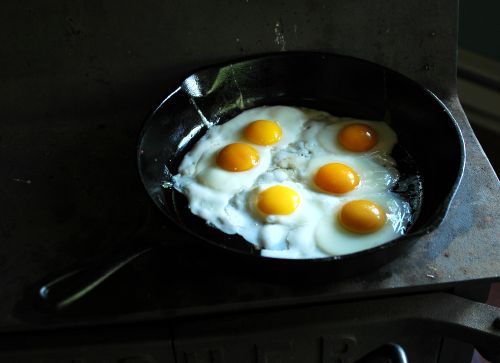 And breakfast, fresh from our own hens!

Cheesemaking is kicking into high gear?we’re freezing a lot of chevre to enjoy later when the milking slows down, and here’s the beginning of a farmhouse cheddar: 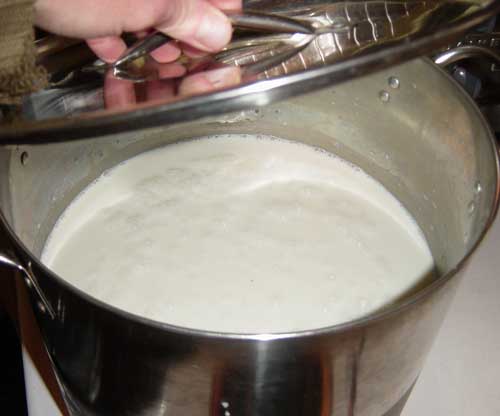 I screwed up the last batch of beer and foolishly didn’t brew for a while.  Our homemade beer (when it works, which it usually does) is much tastier than what we buy at the store, and ends up costing about half as much.

Last year, we got a freeze in early September that took out all the tomato plants, and Teri made a lot of green tomato ketchup.  This year, none of the main (Brandywine) tomato crop had turned red by that point, and my dreams of pasta sauce seemed to by dying?but the past month has been mostly sunny and warm, and we’re bringing in five-gallon buckets every few days.

Though we aren’t entirely dependent on our homegrown food, it’s probably saving us a couple of thousand dollars a year now, so I have a little more appreciation for how much people doing this in the past were subject to the whims of the weather?and for what a joy it is when one’s hard work is rewarded with abundance: 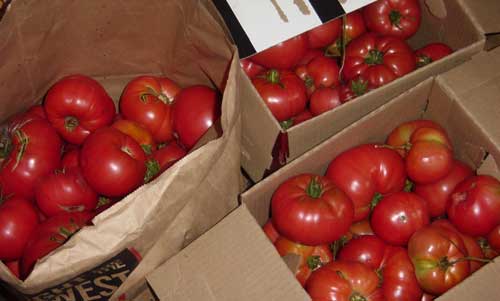 In a break from my usual “functionality IS the aesthetic” carpentry ethic, I’ve made a tea table to go alongside my desk (I hate having beverages and food on the same surface as my computer).  The top was from a rough-cut slab of some unknown hardwood that I got a bunch of for free because of “imperfections”, and the base is something that was left behind when the electric co-op trimmed around the power lines.

It’s beautiful wood?but I didn’t know that when I got it, so most of it is incorporated into the chicken coop.  Now that I’ve seen it sanded and sealed, I think I’ll be pulling the rest of it off the coop to make things from (don’t worry chickens, I have plain old fir boards to replace it).  Anyway, here’s the table, which I’m quite pleased with:

Closeup of the wood: 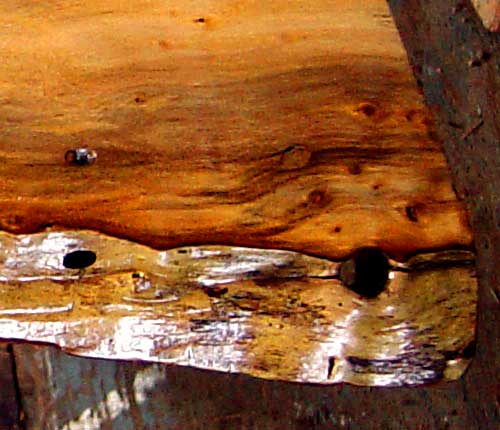 Worky work work!  In addition to all this, there are of course the daily chores such as caring for livestock, cooking, keeping the fire going, earning a living, etc?but some other farm residents have more sensible priorities; I leave you with “Snail Love”: 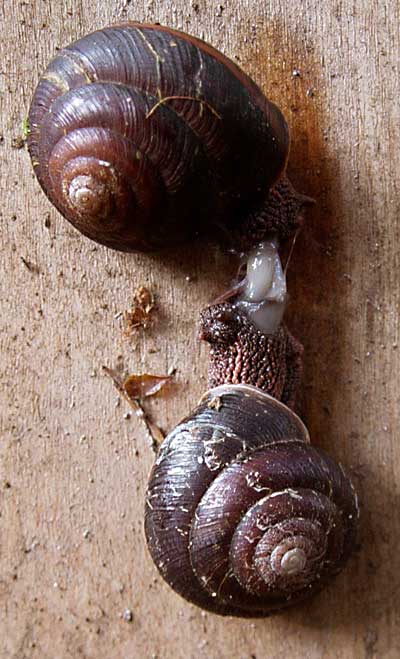 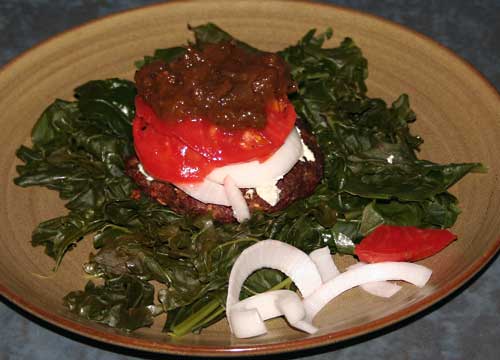 Naturally raised, grass-fed free-range beef from Deck Family Farm, on a bed of our own kale, topped with homegrown tomato, homegrown onion, ketchup Teri made from last year’s tomatoes, and a slice of our own goat cheese.

Did you make it this far? Good reader! You get CUTE GOATS!

Drama Queen is looking like a football ? she’s due to kid this next week!
Extremely low-res goat cuteness from my old point-n-shoot camera 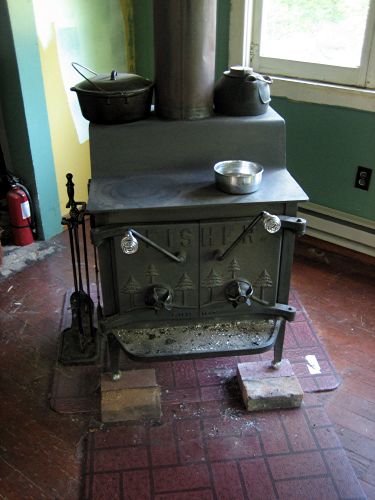 Now it’s time to start making something for dinner…

As is usual this time of year, posts have been sparse right when there’s the most cool stuff to blog about – 36 hour days would be just about right for August and September.

We do have one milestone to report – with a borrowed cheese press and a copy of the excellent Home Cheese Making by Ricki Carroll, we have created our first hard cheese, a farmhouse cheddar that should be edible in just a month or two.

But who can wait a month or two? The cheese has been sitting out for a week to form a rind (really should have been a few days), and today we waxed it for storage, but one end was uneven enough that we worried about the wax being able to form a good seal…so we cut it off and ate it, and after only a week it’s already….CHEESE!

Here’s the cheese before waxing: 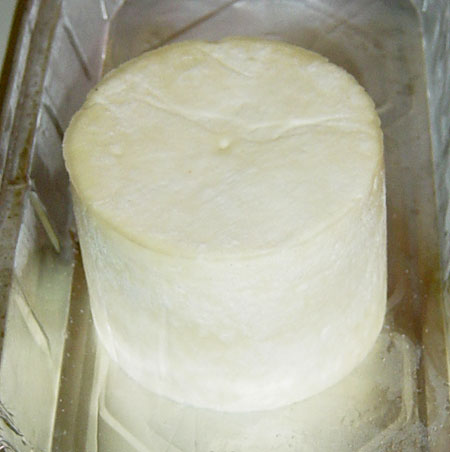 Here’s beeswax in a can, on top of some canning lids in a small cooking pot to make a double boiler. The brush is a “chip” brush – they cost almost nothing at a hardware store, and their natural hair bristles won’t melt in the wax. 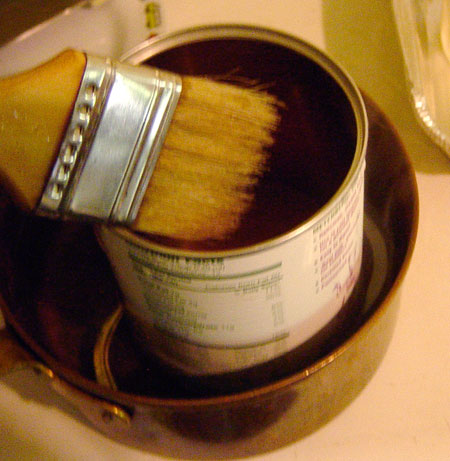 …and here’s the finished product, an inexpertly made and waxed yet already tasty cheese from our good little mini-Oberhasli goats:

What? The cheese wasn’t the stinky part? No, it smelled quite nice. My tobacco, on the other hand…it’s coming out barely tolerable when dried over the course of a few weeks…probably intolerable to any non-smokers in the area. To make it really smooth requires a year or more of careful aging, actually a fermentation process.

Here it is in various stages of the first slow drying (greenish ones are just picked, some in the upper left have been drying for 2-3 weeks already) 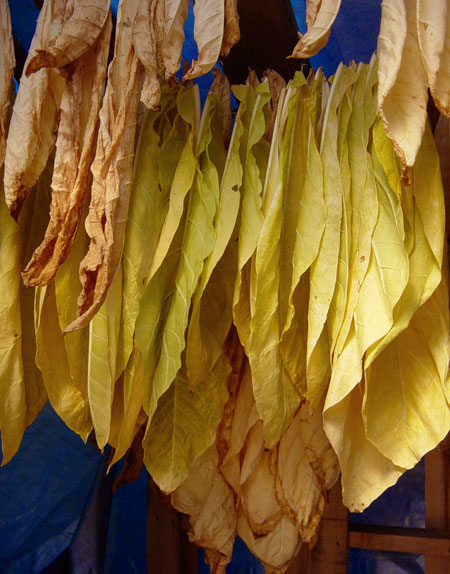 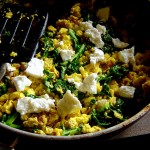 Thoroughly mix eggs and milk (plus salt and pepper if you like) in a jar. Extra points for using a Kerr/Ball jar.

Wash and chop the kale while the butter warms up in a hot frying pan over medium heat. I guess medium heat; this was made on a woodstove. Once butter is bubbling a bit, quickly saute the kale, keeping it moving, just until it becomes a darker green and wilts. Remove kale to another dish, leaving pan on medium-high heat (or rather, adding wood and opening the air inlet a bit).

Break the ground sausage up into small bits in the pan and keep it moving till well browned. Reduce heat to medium and (after a final stir) pour in the egg/milk mixture. Let this cook until it’s solid about halfway through, then mix in the kale and scramble it up.

When it’s close to done, drop the cheese slices onto the top.

In the middle of our waiting-for-goat-babies night, I realized I was absolutely famished and needed animal fat NOW! The following took about 10 minutes of hands-on time to prepare (including running out to pick kale) and will definitely be repeated.

To make a portable, one-hand meal, I wrapped some sheets of newspaper around the finished product. The oily newspaper is wonderful stuff for starting the woodstove later.

Sorry no photos; these got scarfed right up!

*“Lamb” refers to meat from a sheep under 1 year of age, not little tiny babies. Generally, the older it is, the “sheepier” it tastes, and the more salt and mint you will want to use.