The latest batch of beer is a light one, made with amber malt and the pale, growing tips of Douglas fir trees in place of hops. It felt like a dice roll, but turned out to be one of the nicest brews we’ve made yet; light, citrusy (fir even contains vitamin c!), perfect for summer days. After several hours of fencing work today, I drank one and it passed that important test with flying colors. 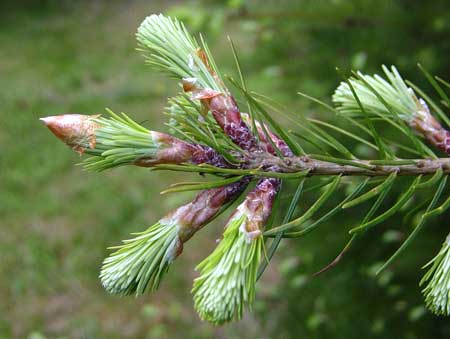 Another citrusy plant we’re blessed with an abundant supply of is wood sorrel. A little mouth-puckering to just eat a handful, but delightful in salads, especially ones that also feature the bitterish flavors of dandelion and the like: 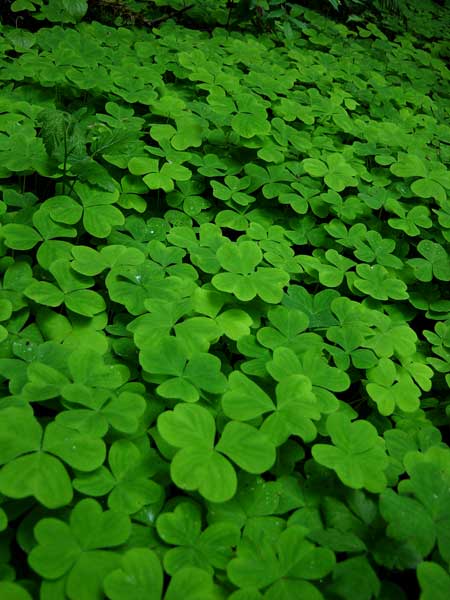 and of course, we’re surrounded by vast hordes of mushrooms, almost all of which resist my attempts at identification, but are still fun to look at: 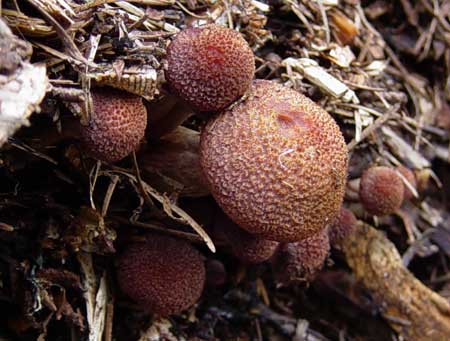 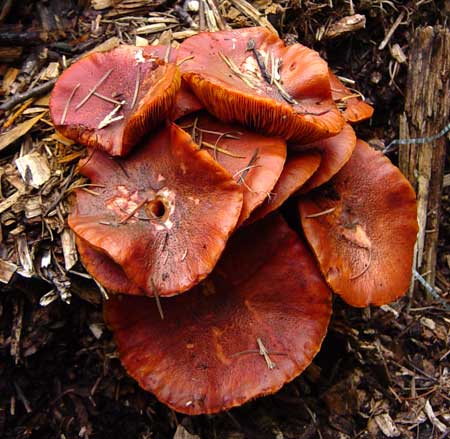 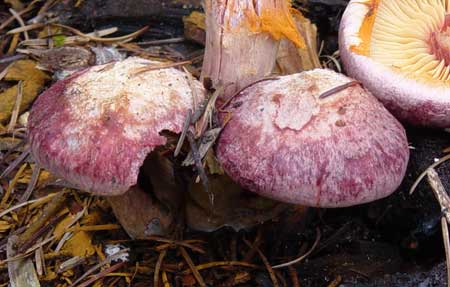 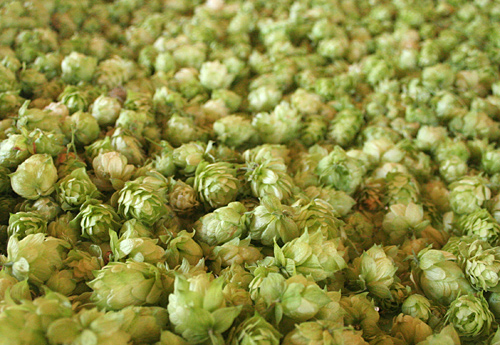 Our own first-year hops plants have given us enough flowers for a small batch of beer! It was easy to handle using the food dehydrator, and I’m looking forward to brewing with it.

The friend who gave me the rhizomes (root chunks) to start the patch doesn’t use his hops, and offered to let us pick some. We were asked to leave half of it intact, because he has another friend who uses hops, but by the time we’d taken maybe a third of it we had one and a half industrial-size Hefty bags full of heavily flower-laden vines. We were up into the wee hours that night trimming off the flower cones, with the poor dog tied up outside because hops can be deadly poisonous to dogs.

Yesterday morning there was still a good amount of untrimmed hops left, and after a few hours of cutting I had several paper grocery bags full. This was not going to fit into the dehydrator.

I found three identically sized framed window screens (scavenged after renovation of a nursing home) and joined them on the long sides with our good friend Mr. Duct Tape, making a triangular tunnel. The “back” end was covered with one of the hefty bags, and I shaped a bit of hardware cloth to serve as a removable door for the front.

After hanging this device from the ceiling in the shed, I put our box fan under it to circulate air up through the hops. The flowers are piled a couple of inches deep in the dryer, so I’m stirring the pile up regularly, and it seems to be working well.

Here’s the latest bit of hillbilly engineering, a large herb dryer that I estimate cost about 5 cents (for the duct tape): 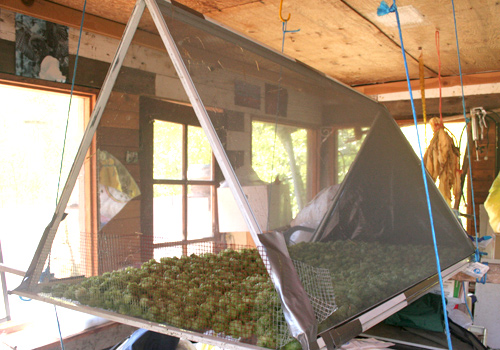 Swarm!
Yesterday, I was watering in a layer of mulch and soil around the potato plants when I heard a strange buzzing sound. I ignored it, and it got louder. Could the neighbor be home from work already, running some sort of machine? I turned off the water and the sound was much clearer. It was the sound of tens of thousands of bees bearing down on me, a huge black cloud the edge of which was only about 20 feet away.

I reminded myself that honeybees aren’t aggressive, particularly when they’re swarming (seeking a new hive), and stood my ground. For about five seconds. They were headed straight for me, and I ran like hell toward the house.

I dashed inside, got some local organic raw honey, and smeared a little bit into our recently purchased bee box. Ran back out the the garden with the box, but I could hear that the bees had already moved on, across the road. Oh well, that’s a project for next year anyway – we’ll probably buy a queen and workers from a local business called GloryBee. It would have been great if they’d decided to settle in with us, though. Projects:
Bees can wait, but with organic eggs at $5/dozen, chickens can’t…so a new coop is rising from the rotted ruins of the one that was here when we arrived. It’s made of scrap lumber from a local sawmill and the better pieces of the old coop: The most labor-intensive part of making your own beer is the bottling. Using bigger bottles helps, and replacing a rubber gasket now and then seems more sustainable than using new crimp-on caps every time, so we got a bunch of used Grolsch bottles…bottling is so much easier with pint bottles that don’t require use of the capper device. Hillbillies from Brooklyn
Some might say we’re getting a little redneck-y out here in the mountains. I guess so, considering that a holiday decoration from last December is still hanging around: We’ve been talking about brewing our own beer and wine for some time, and we finally started!

About a month ago, I got a basic brewing kit from The Home Fermenter Center in Eugene, with equipment and supplies to make a 5-gallon batch of beer. Not long after that, I had a great Craigslist score – Six 5-gallon carboys (big glass jugs) with airlocks, some wine bottles, another giant plastic bucket for mixing and such, and some other odds and ends. The kit came with ingredients to make pale ale – cans of malt, a packet of yeast, and a vacuum-packed mesh bag of hops.

The day we had planned to start the project was the day we found out about Babycat’s demise, so this first batch will be called Babycat Brew in her honor.

The basic process is pretty simple, though like all good hobbies there is no end of gadgets, techniques, and options available to the obsessive. You basically boil the malt in a few quarts of water, drop in some hops, transfer it to your fermenter and top off with water, cool it, add yeast, and leave it sitting with an airlock on top (a device that allows fermentation gases to escape while blocking potentially contaminated outside air from entering). For a week and a half, one of the background sounds of our life was the “glorp” of CO2 escaping from the fermenter. When that’s done, it’s beer (or something else nameless and foul, if sanitizing procedures weren’t followed!).

The glorping was done several days ago, meaning that the substance in the bucket is now beer! (or possibly some hideous slime creature).

After an hour or two of preparation (cleaning bottles and equipment), we siphoned the beer from the fermenter into another bucket, taking care not to transfer the layer of spent yeast at the bottom. We added a bit of sugar and stirred – this gives the yeast something to work with after bottling, which carbonates the beer. Right now, it’s rather tasty (YAY!) but completely flat.

More siphoning, this time into bottles, which Teri capped and placed into old 6 pack holders. Now we give it a week more of warm temperature so the yeast can make bubbles in the bottles, then cool and enjoy!

The whole process is very satisfying, and even using the ultra-convenient “kit”, the cost is less than half of what we pay buying 6-packs of local craft beers.

Not satisfied with just beer, I’ve also started a small batch of blackberry wine, made from our own berries. Here you can see the bubbles rising to the top of the jug as it ferments: 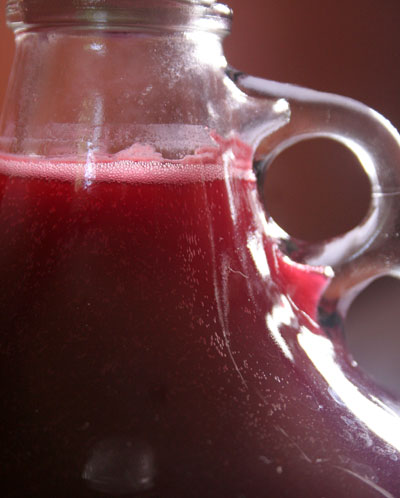 I ‘racked’ it just a few days ago – siphoned it carefully into another container, leaving spent yeast at the bottom – and had a taste. Not great yet, but clearly on its way to becoming wine. The difficult part is that it’ll need another 6 months to a year to mature.

Tomorrow, I’m off to New York to visit family and friends and deal with some of our stuff, which languishes in a too-expensive self storage space because a 3000 mile Uhaul trip is too-too-too-too expensive. When I return, I look forward to enjoying some Babycat Brew with Teri!