So, about ten years ago, I pulled away from my friend Dave’s house in a different VW camper. A few minutes down the highway, I noticed something missing. Raced back to Dave’s house to get the dog! Poor Ceili, being tethered to me by an invisible bungee cord, was distraught, and I felt awful about it.

Whenever we’re packing up our campsite, Ceili gets agitated and wants to be in the van BEFORE all the other stuff, which makes getting all the other stuff in there more or less impossible. “Don’t forget the dog!” she seems to be saying.

Last week Teri and Ceili and I visited Dave in Florida, and before we left he gave us these custom-made t-shirts with a picture of Ceili and the caption “Don’t forget the dog!!”, which we’re supposed to don before hitting the road: 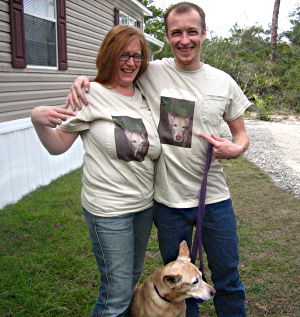 In other news, while traveling through a huge rainstorm between Houston (which, being New Yorkers, we have to keep reminding ourselves isn’t pronounced “HOUSE-ton”) and San Antonio, the LetsGo’s oil light started blinking. Since I checked the oil about two hours before and it was fine, the most likely cause was “the engine has blown all her oil and is about to impersonate a hand grenade”.

I shut the engine and coasted down a well-placed offramp without power steering or brakes, stopping in a gas station parking lot. Got out and checked the oil, but the rain was so intense that it spattered the dipstick before I could get it into the flashlight beam, and I couldn’t read it.
Soaked and convinced that the engine was in the process of self-destructing, I went back into the van to get some oil, and a Texas State trooper came up fast and stopped right next to us. We hadn’t done anything remotely wrong, but you never know, and interest from police doesn’t usually add to one’s enjoyment. Happy happy joy joy.

The trooper went into the gas station (whew – several more showed up and ran in after), and I added a bit of oil. Started the engine, and no oil light. Hmmm. There was nothing but the gas station at this exit, and all the cops rushing in suggested that it might not be the most peaceful place in the world at the moment, so we got back on the highway to find lodging and look at the car.

The oil light came back on just about the time that no lights/exits/etc were visible. Then it went off. Then it flickered. This could be doom.

We pulled into a nice motel at the next exit; the oil light was still flickering, and the van was idling rough. Ugh. As Teri checked us in, an upset woman came in to see about a room, then her equally upset husband came in to say “forget it” – their uhaul with car-on-trailer couldn’t get all the way into the parking lot, and couldn’t turn around.

I went out to block traffic so he could back the whole thing onto the road and go look for a place with a bigger lot, and they told us of getting stuck in the mud and towed earlier today. As they pulled away, I thought “well, we don’t have it so bad today, do we?”

Upon parking the Vanagon, I spied…another blue Vanagon in the lot! Must be a good omen!

I had a beer and snack, then went out to worry about the car. Naturally, it started right up and ran just fine with no oil light or any other problem. Took it ten miles down the road, got it up to its top speed of 65ish, and it ran like a top (that is, a top with a valve tap and lots of wind noise).

Someone on thesamba.com (the definitive VW enthusiast site) suggested that the cause might be the oxygen sensor’s poor placement – right in the spray zone from the rear driver’s side tire. I have a new one stashed somewhere inside the van, I’ll replace it soon…

It all worked out just fine, and in the morning we’ll be sure to NOT FORGET THE DOG.