A few weeks ago, we noticed that a colorful, pretty bird had taken up residence in one of the many birdhouses left here by former residents (this one happened to be attached to the side of the shed, so it was visible from the kitchen window – nicely enough for us).

Eventually we identified the bird as a Tree Swallow, and realized that we were seeing not one but two different birds flying in and out – a male and a female. We started wondering if they had laid eggs in there.

Sure enough, just a couple of weeks ago, I was hanging clothes on the line (which runs in front of the bird house), and Momma and Poppa bird seemed more agitated than usual with me so close to their nest – flying in circles and swooping right above my head. I soon realized that there was a chorus of tiny squeaky “cheeps” coming from inside the birdhouse. We had babies!

This is the one we named Birdhead, in his first baby photo (just a couple of weeks ago!) He was the biggest and boldest of the three babies, and the first one to stick his head out and look around. The middle baby became Birdhead II, as he eventually started poking his head out as well. 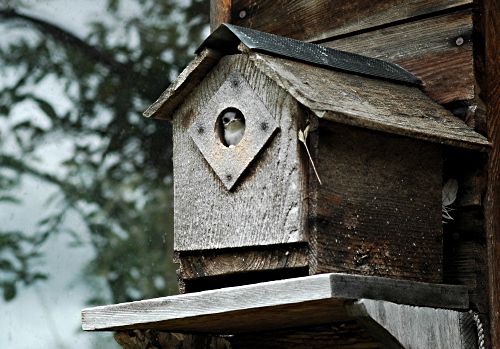 This is Birdhead about a week ago, getting fed.

And lastly, here’s a series taken this past Friday of what I thought at the time was the two Birdheads. Unbeknownst to me, they were getting ready to leave the nest. I later realized that the original Birdhead had already left and was flying around with Momma and Poppa. So pictured here are Birdhead II and Runtley – so named because he was the smallest and most timid of the three – rarely poking his head out to look around, until the day that everyone else left the nest. 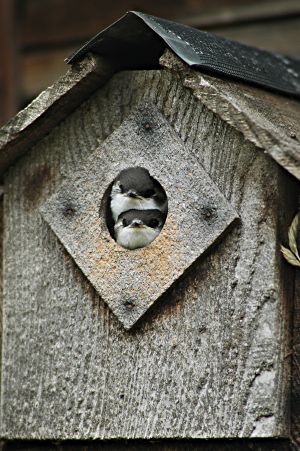 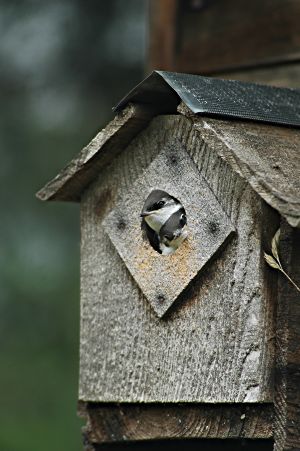 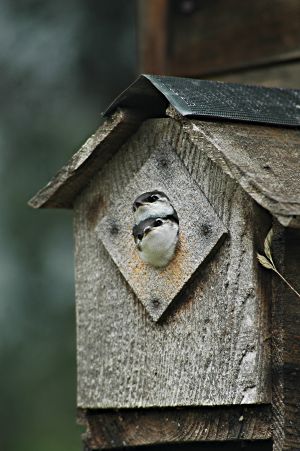 We spent a couple of hours on Friday evening sitting in our yard and drinking beer, while watching Runtley’s attempts to screw up his courage and join his family (Birdhead II had left sometime that afternoon). The parents and larger siblings stayed in the area, and kept flying over and chirping encouragement. Poor Runtley kept getting as far as the edge, with about half of his body outside, and then he’d get scared and go back inside.

Eventually it got dark, his family went away to sleep in the trees, and poor Runtley settled into to the birdhouse for a night alone. In the morning, I saw his little head sticking out, so I stepped outside to check on him. Just as I walked out, I heard a fluttering noise and saw a blur moving away. Yep, when I got there, the nest was empty. Way to go Runtley!

The sad part is I still walk outside expecting to be greeted by our bird friends. But they’ve moved on, doing whatever bird things they do once the young ‘uns are out and about – probably teaching them how to live out in this big wide world. I’m hoping the whole family will return when it’s nesting time next year.