Several weeks ago now, we received two more beautiful black little hens from the same neighbor/new friend who gifted us with Atom and Molly. The new girls have settled in beautifully, and our ladies are currently giving us 12-14 eggs a week.

Our birds are also now officially free-range for most of each weekday (they remain inside for the weekends – too many dogs roaming around when we and our neighbor/friend/landlord are home and outside working on projects). I leave them in their coop-and-run until about noon each day, to give the dog a couple of good off-leash walks/runs while they’re still safely un-chase-able. Then I open the door to freedom.

Here’s Atom, taking the first steps out of the coop, on the first day I let them out: 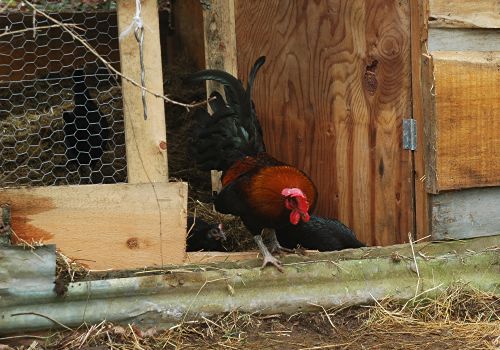 And here two of the girls have followed him out (that’s Molly on the right, with Leo – short for Leopard-skin Pillbox Hat – on the left, and Shygirl – who is actually no longer quite so shy, but the name has stuck – still in the coop behind the chicken wire): 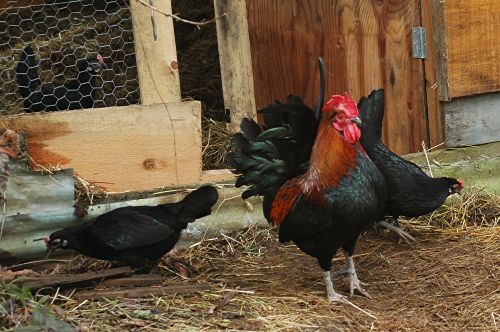 And here are some very happy birds: 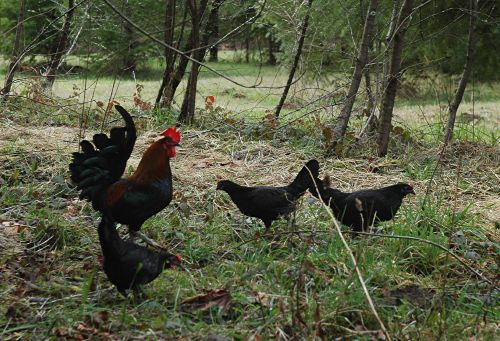 Surprisingly, they tend to stay fairly close to their coop, our house, and our outbuildings. Occasionally they range a bit further afield, but if I look for them, I’m always able to locate them without a problem. And at dusk, they always return on their own to the safety of their coop – all I have to do is close and bolt the door behind them, to guard against predators.

By allowing them to free-range and forage for their own food, they supply themselves with a far better diet than what we could provide – full of fresh green grasses and a wide variety of slugs, bugs and worms – making their eggs that much more nutritious for us (the fresh greens are what gives truly free-range chickens that vivid yellow-orange yolk – so different from supermarket eggs). The various grains and treats I throw to them in the mornings are just icing on the cake.

And fittingly, it was on last Friday’s Spring Equinox that we found ourselves outside hunting for eggs. A side effect of allowing the chickens to roam is that they soon find many suitable places – places other than their nest boxes – to lay their eggs.

Shortly after I let them out that day, I realized that I only saw two of the hens. The third was obviously off laying, though not in either of the nest boxes.

So we went on a hen-hunt, trying to find her nest. After about 20 minutes of unsuccessful searching, I saw Molly walking serenely back to join the others, down a little path next to one of the giant trees that guards our home. So we narrowed our search. A few minutes later, we found the nest – with Molly’s still-warm egg nestled next to two others left from a day or two earlier.

This is the well-concealed nest that we must have walked by about a dozen times while we were looking for her. Can you see it – right in the middle of the photo? (Oops – I should have taken the photo with the eggs still in the nest.) 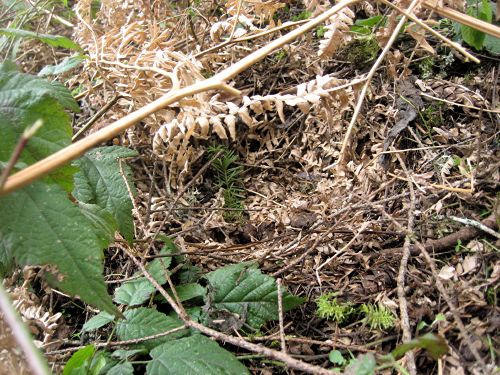 We’ve left the nest alone, since if we destroy it they’ll just make others, and then we’ll have to find them all over again. As long as they feel like it’s a safe spot, they’ll keep laying there. And I’ll keep checking it – along with their nest boxes – a couple of times a day. 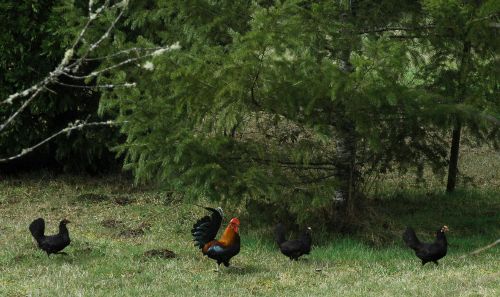