“Hard” cheeses such as chedder require a press to expel the moisture – just the right amount of moisture. Too much pressure, and you end up with a concrete block (yes, we have.) Too little pressure, and retained moisture nourishes unwanted bacteria and molds (yes, it smelled like the devil’s armpit.)

The cheese press we’ve been using is based on a spring. You turn a handle to put pressure on the apparatus, and when the spring is fully compressed, that’s 50 pounds. For 10, 20, etc pound presses, you guesstimate how far the spring is between fully expanded and fully compressed. It wasn’t working for us.

We happened upon this small basket with a disk that fits inside it at our favorite homebrew supply in Eugene: 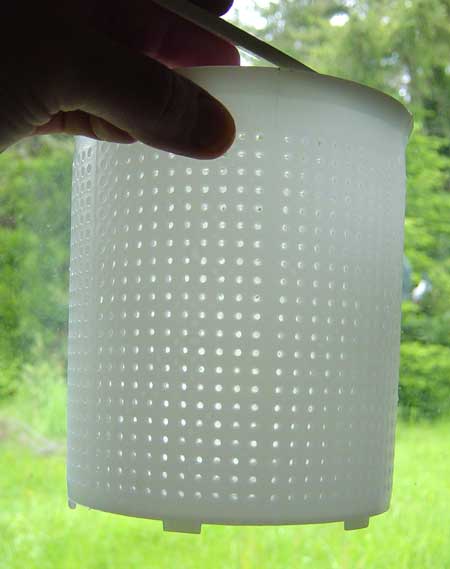 That is MUCH better than the solid, slightly off-round PVC pipe that the spring press works with! Displayed with it was $200-something worth of fine craftsmanship and clever engineering in the form of a rather complicated lever device. It looks great, but we’ll stick with the $6.95 basket and see what we’ve got.

In preparation for such a find, I had already thrift-stored a set of barbell weights in 5 and 10 pound increments…but they are too big to just set on top of the follower disk on top of the cheese.

The solution? An empty tobacco can, a stick that was lying around in the yard, and some concrete: 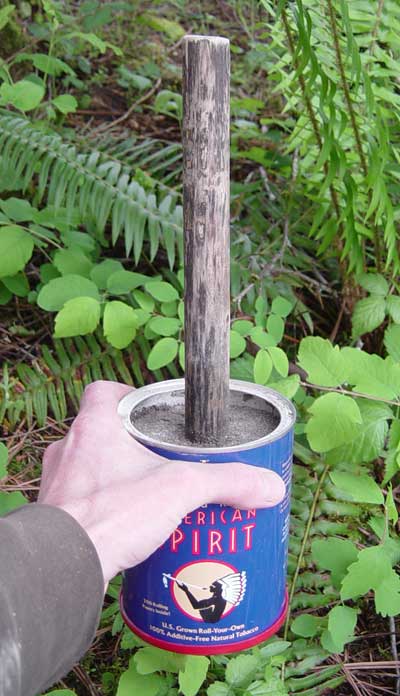 The tobacco can fits neatly on top of the pressing disk, and the weights fit over the post on top. It weighs 4 pounds and will probably get a pound added somehow as cheese instructions tend to be in 5 pound increments.

We’ll let you know how it works!