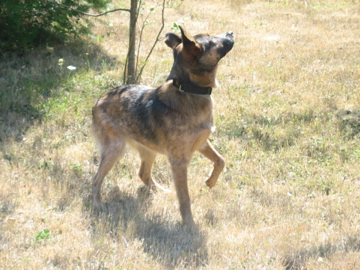 A hawk just killed one of our Welsummer chicks, but Daks, our Red Heeler mix, got there in time to prevent the hawk from getting a meal out of it, so it won’t start to see our field as the Easy Chicken Place.

When Teri found the dead bird, Daks was lying next to her, guarding. Then we had to find the other chickens, who had scattered to hiding places and would be vulnerable when they came out alone looking for their flock.

Daks came through again; he knows what “Where’s the chicken?” means, and guides us to their hiding places so they can be herded back to the relative safety of their group.

The amazing thing about all the stuff he does to help us – watching the sky for hawks and driving them off (usually before they do any harm), finding lost birds, etc. – is that we haven’t overtly trained him to do these things; he figures out what we’re trying to accomplish and jumps in to help.

For instance, watching for hawks – Daks noticed that Teri and I would run out clapping our hands and shouting whenever a hawk circled the field, and he just took over, and now works hard all day long to keep everyone safe. A few weeks ago he treed a big tomcat who was prowling around near the chicken coop, and once he came charging up barking and snarling at just the right moment to drastically change the dynamic when an Up To No Good (semi)human trespasser was starting to get aggressive with me after I foolishly confronted him unarmed.

Daks was rewarded with chicken feet (crunchy dog delicacy!) and entrails for his good work today.

But it’s still sad dressing out a beautiful little 1-lb chicken who would have grown up to lay big, chocolate-brown eggs…especially when it happens before breakfast!

7 thoughts on “Heeler dog: possibly the most important animal on a small farm”