Woke up this morning all tired and cold and cranky – we had come into Santa Fe two nights ago in the middle of a big snowstorm. We started that day still in Carlsbad, in southern New Mexico, then drove north to Roswell (home of the famous UFO crash site, Area 51, and alien – little green men – fever). There seemed to be about 3 or 4 blocks filled with UFO museums and alien-themed souvenir shops, surrounded by a normal little town. We picked one of the UFO museums and went inside.

Peter at the fabled “Alien Autopsy”: 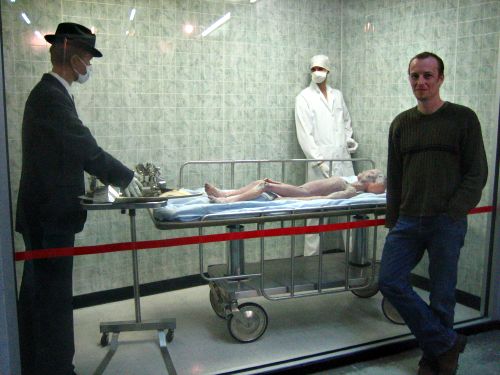 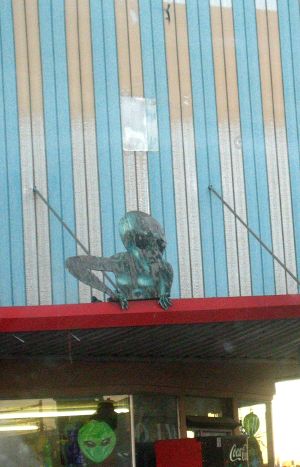 After our fun little detour, we got back on the road toward Santa Fe. When we hit the snowstorm, we almost turned around and headed back to the south, but I just really wanted to see Santa Fe, so we pressed on. That first night we sprang for a hotel room – didn’t really want to spend the money, but we had convinced ourselves that it was too cold to camp outside.

We spent part of the next afternoon driving around the city, again having convinced ourselves it was too cold to get out and walk around much. It was great to see so many VW Vanagons and Buses and Beetles – we didn’t feel quite so much like freaky hippies anymore.

As it happens, we ended up parking next to another Vanagon at a Starbuck’s, and met the owner and her friend. After she informed us that she switched out her Vanagon engine for a more powerful Subaru engine herself (right on!), they told us about “Busses By the Bridge”, a mass gathering of VW addicts taking place next weekend near the Arizona-California border. We decided on the spot to make that our next destination – 3 days of camping with other VW-heads for only $25, along with parts vendors and an organized swap meet – cool!

We decided that Santa Fe had been good to us after all, and headed west to the Albuquerque KOA, knowing we’d be camping in the cold and snow, but not wanting to spend money on another hotel room. (We do have a space heater, but it tends to suck the moisture out of the already dry winter air, hence my dehydration headache and crankiness.)

We had made plans yesterday evening to drive back to Santa Fe (for a new fuel filter…again…), and then head north to meet up with someone from an online VW group who said he could do some needed welding on our car door. (We also really wanted to meet him because he’s totally “off the grid” – meaning he produces his own energy via solar power and other “alternative” means – which we are very interested in for our future fantasy log house.)

So, we fueled ourselves at Starbucks (with me still cranky), and hit the road. As we were getting back on the highway to head back toward Santa Fe, we saw a twenty-something hippy-ish couple hitching a ride. We (of course) picked them up and drove them into town.

The girl said she’s been hitchhiking for 5 years now. They had ridden a freight train into NM, and slept last night in an abandoned house. Their possessions consisted pretty much of what they were wearing and what they could carry on their backs. They did not have a portable heater, or any of the other “luxuries” that we’re carrying in the van (like a few weeks’ worth of food, refrigerator, stove, etc). And…they seemed totally chill and happy.

I suddenly realized how stupid I was for complaining and being cranky about the cold, about my headache, about anything. We have more than we could ever need right here in our van, and are having the time of our lives. How I could have been feeling anything but grateful, or even imagining that it could be “too cold” – when we have an insulated van, complete with heat, down comforter, blankets, etc – is beyond me. It was like a weight lifted right off.

We left our new friends in downtown Santa Fe, where they immediately hooked up with another member of their tribe (a twenty-something hippy type in a rainbow hat, also traveling). After chatting for a few minutes and giving them some apples and trail mix for the road, we got back in the van and headed north.

(Funny aside: We’ve been chuckling a little about some of the really huge RVs – some people seem to need to take their entire house and everything they own on the road with them. Next to them, we’re authentically “roughing it.” But, next to our hitchhikers this morning, we realized WE were the old frumpy ones, traveling around with all of our “luxuries” in our little house, not really roughing it at all!)

So here we are now: the sun is shining, the mountains are amazing, and I believe we are about to meet another incredibly cool person who will help us make some repairs to our Let’s Go, and teach us a little about alternative energy and living off of the grid. Life couldn’t be better.

Turns out, all it took to set my head back on straight was a couple of random encounters in a funky New Mexico town. And here’s the biggest and best thing I’ve learned on the road so far: that for the most part, given half a chance, most people are warm and friendly, and often incredibly generous. NYC is slowly but surely wearing off… 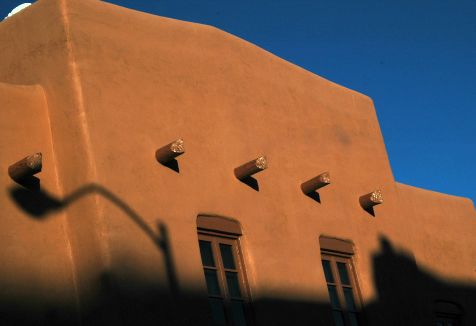