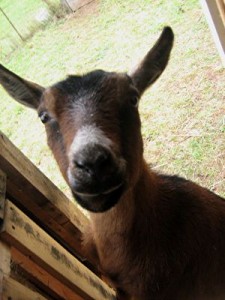 Just in from putting the goats up for the night. Yes, I said goats, plural. We are now the proud parents of two of these beautiful creatures. As you know if you’ve been reading along (you have been reading along, haven’t you?), Peter’s been hard at work getting our goat house and pasture ready for the impending arrival of a couple of dairy goats.

Of course, once we met Cocoa, we totally fell in love with her and had to add her to our soon-to-be herd. She was our first arrival, on Sunday afternoon. If you read Peter’s post about her first day (and night) with us, you know that she really did not like being left alone – goats are social animals – hence his night in the goat house in 37 degree weather. 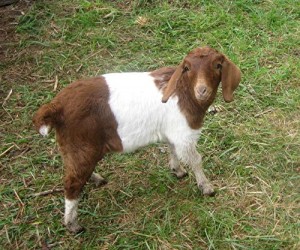 So, we needed to get another goat, fast. We’d already planned to purchase our two milk goats from a neighbor who raises them, and were in discussions as to whether we’d buy a milking doe and her female kid, or a milking doe (once her kids were weaned) along with a female yearling. To our delight, Cocoa settled it for us by coming to us now and needing a friend.

On Monday, Drama Queen came to live with us. She’s a yearling doe, young and frisky, but long weaned from her mama. And she certainly lives up to her name. She’s gorgeous and graceful, moves like a deer, and has the temperament of a spoiled movie star. We love her. 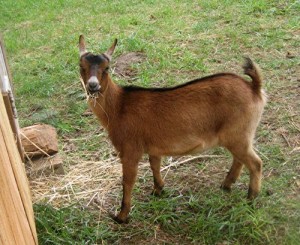 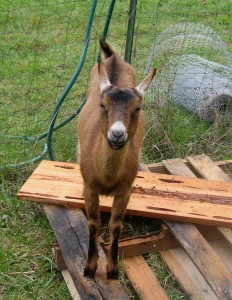 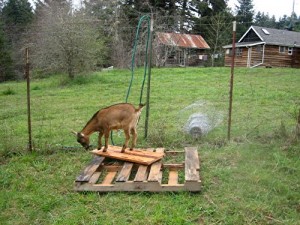 Her first day with us was mostly spent establishing her dominance over Cocoa by butting her (see photo below). At first Cocoa butted back, but after a while I think she just got tired of it and learned to ignore Drama’s obnoxiousness and move away. By yesterday Drama had calmed down a lot – she now seems to be buddies with Cocoa (though she makes it clear she’s still top dog), and has even warmed up to us. 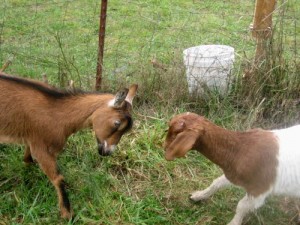 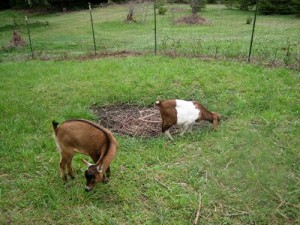 The two of them together are quite a pair, and we’re smitten.

P.S. Ok, I know this is Drama’s debut, but I just can’t resist one more shot of our baby – she’s about 3 1/2 months old, so still being bottle fed once a day (though she’s happily eating her share of the “grown-up” food too). 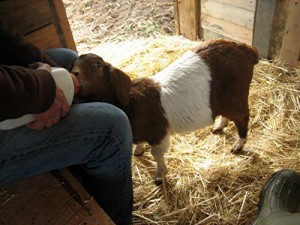 Go ahead, say it – you know you want to:

Another P.S. Can you believe I already have nicknames for both of them? Cocoa’s is Cocoa Belly (get it? Like Kokopelli?), and Drama’s is Dramarama (or if she’s being extra dramatic, it’s Dramarama Ding Dong).