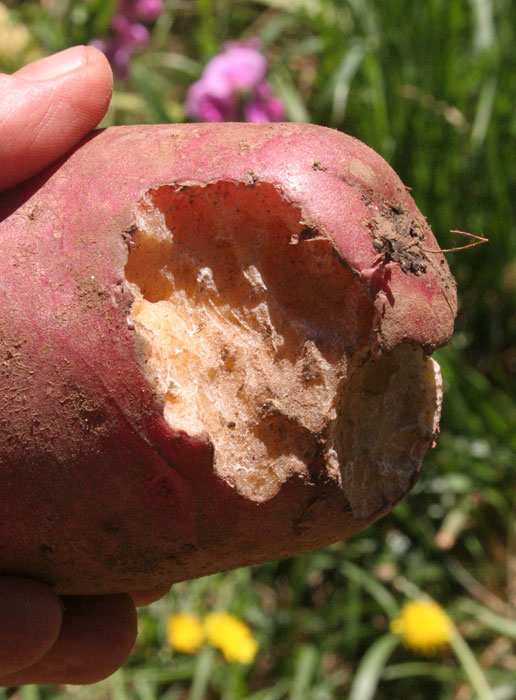 In all seriousness, we don’t begrudge the little fellas the occasional onion or beet; they contribute far more to the garden than they take. Howzat?

Bear with me a moment and I’ll get to it.

Before industrial agriculture and forestry came around, the ground here was thickly covered in rich, fluffy duff. You can still go into the few remaining scraps of old growth forest and easily push your hand a foot or more into the ground to see what it’s like. If it wasn’t so scarce I’d harvest some as the world’s best potting soil, but it’s mostly been destroyed and takes centuries to recover, so I don’t.
After a clearcut:

…much of the fungal and microbial life that contributes to building this amazing soil is killed off by the sunlight, and fertility is rapidly lost to the dry winds in summer (several months of no rain) and erosion in the winter (~8 months of constant rain). Eventually, what’s left is orange clay that can support only the most persistent “weeds” and deep-rooted trees. Eventually, the hardy, brushy plants will build a new soil layer, but people don’t live that long.

It’s not that bad on our little patch, because the land has been allowed to recover to some extent, but several inches beneath the surface it’s pretty much pure pottery. This is where the voles and other tunneling creatures are indispensable – their tunnels help the rainwater get down to the river without taking everything else along with it, and they break up the hard clay, mixing in the soil that they move around and of course leaving “fertilizer” in their wake.

So they’re quite welcome to a certain share of our harvest; they help us produce it!