After all the planning, preparation, and stockpiling of supplies, Teri and I have our first kid. We didn’t, of course, think we’d have one this soon, but fate intervened -the mother didn’t want it, and the people she was living with already have loads of ’em.

We have a small house, and kids can make a real mess with the milk and poop and whatnot (plus diapers are EXPENSIVE!), so we’re keeping her in a shack out in the yard for now. I know that sounds messed up, but we’re not cruel; there’s a nice thick layer of straw on the floor and a bucket of water.

OK, April Fools is past, I’ll stop trying to confuse you.

Last month, I went to pick up our milk and eggs at a neighbor’s farm. The milking wasn’t done yet when I arrived, so I wandered down to their goat barn, where they’ve got dozens of meat goats. They were all fun to watch, but one in particular really got my attention – she seemed to have no fear, and soaked up affection like a sponge. On a later trip, Teri got to meet her, and was also struck by how sweet she was.

After that, we had a BBQ and invited our farming neighbors. We commented on the friendly goat, and they kind of chuckled – “Oh, do you want her?”. We hadn’t realized it when we met her through a fence, but she is almost completely blind, and has been a big pain. She would get left behind by the herd, and once they had to hunt for three days before finding her.

Yesterday we finally went to pick her up. Her name is Cocoa, and she gets around amazingly well for not being able to see much.

Goats are social animals, and having been rejected by her mother this one is more partial to human company. The bleating whenever we left her alone in the pen yesterday was heartbreaking. I ended up putting a tarp down and climbing into my sleeping bag wearing a down jacket…in the goat house. Once I settled down to sleep, Cocoa did the same. It dropped to about 37 last night, and I have this thing where I wake up whenever a goat walks across my face, so I’m very much looking forward to a nap!

She seems to be happily settling in now. But let’s get to the part you’ve all been waiting for, the cute photos (all taken by Teri)

This shot, taken as she turned her head, really shows off her Bassett-hound ears: 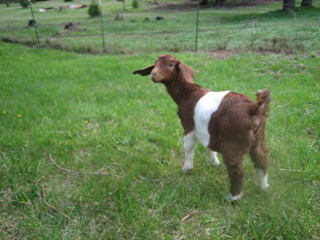 Here she is with some grass hanging out of her mouth: 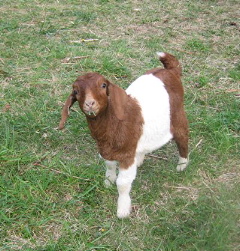 A closer shot (you can see some of the notching in her ears here – too many adventures, probably involving barbed wire fences she didn’t see):

And finally, enjoying some fresh alfalfa hay in her new house: 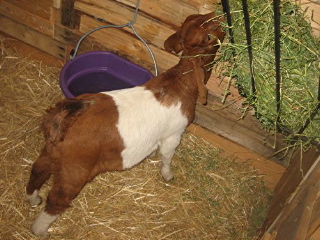 And there’s more to come! You can’t keep just one goat (and Cocoa wouldn’t provide a lot of milk anyway, being bred for eating) because they get lonely…but we thought we’d give her a little time to settle in and get familiar with the place…

Note: Don’t worry, Cocoa isn’t here to become goatburger (though I’ve had goatburger from the same farm she came from and it was delicious). She’s probably going to be “just” a pet, since her kids wouldn’t have much sale value and she isn’t from breeds known for high milk production (she’s a Boer/Kiko mix). The other goats we get will be for milk purposes, though of course they’ll get all the attention and skritches they want.

One thought on “Our first kid! (And no, we’re not planning to get married)”