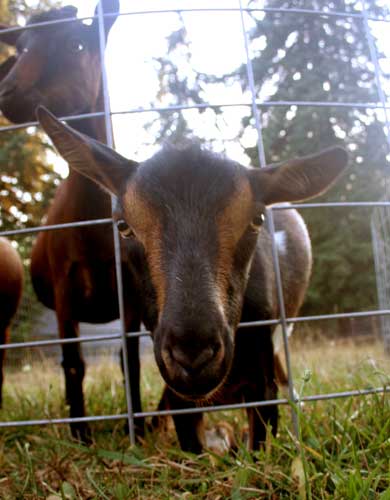 ?but the news these days is mostly happening in the garden.

(There will be more cute goats later, promise)

Spring dragged on cool and rainy until well into June this year. Some plants loved it, and some plants not so much (“Tomatoes looks great for early July! Too bad it’s mid-August.”)

Cabbage has been one of the happy ones: 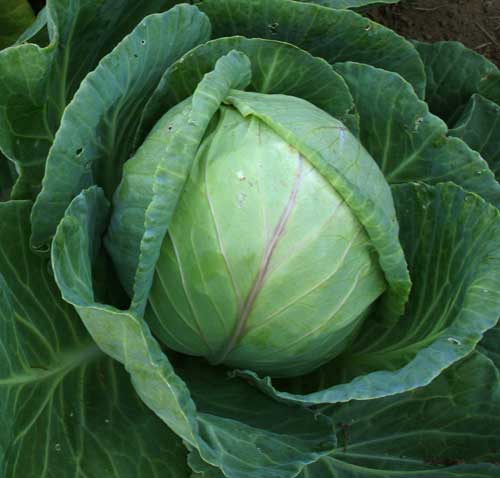 Peas did great too ? grew up over the top of the trellises, produced nicely, and helped keep us too busy to take photos of ’em. With the difficulty of picking each pod at the perfect moment and then processing them all, one by one each plant matures a hidden pod or two and starts dying down.

In the past few years, we didn’t shell and save so many peas, instead eating most of them fresh when they were half grown. Sweet and delicious, pod and all. The plants kept producing until we got tired of picking peas, and I suspect that we had a much better labor-to-nutrients ratio that way.

We’ve dabbled in small corn plots a couple of times, in heavy clay soil with fish juice fertilizer, with unimpressive results. This year we’re trying two plots that have copious amounts of composted goat stuff worked in a foot and a half deep. This one is popcorn (name escapes me, probably heirloom):

This one is a hybrid production variety of sweet corn. Not what I’d usually grow, but someone offered me a tray of 100 five-inch-long starts and I’m sure looking forward to seeing how fast it can get from the stalk to the grill to the butter. 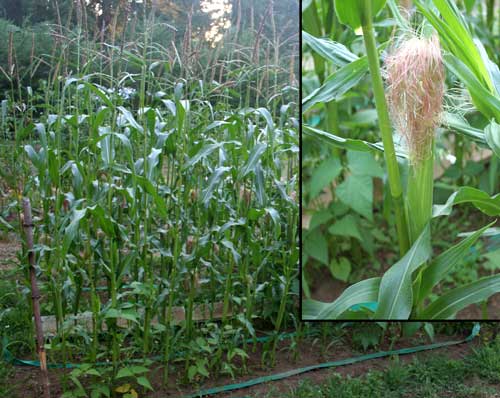 Both of those corn plots, assuming Summer doesn’t completely fizzle out early, should provide a few nice baskets of food, but we’re still getting a feel for growing grains so we’ve been doing small plots.

One of the grains that sounds less labor-intensive to harvest and process is amaranth, which bears its ‘fruit’ in big clusters, so we’ve planted a little experimental stand of Hopi Red Dye amaranth with tobacco bookends. It looks pretty happy: 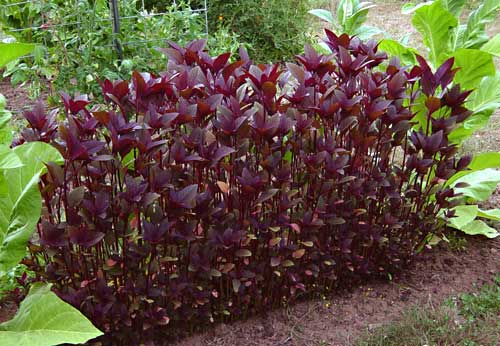 Our buckwheat patch is somewhat smaller ? one plant at the moment. I like it as a cover crop, so I’ve grown quite a bit of it, but I’ve never allowed it to grow over a foot or so before scything and composting it. This one volunteered at the end of a row?it’s a bit over five feet tall now: 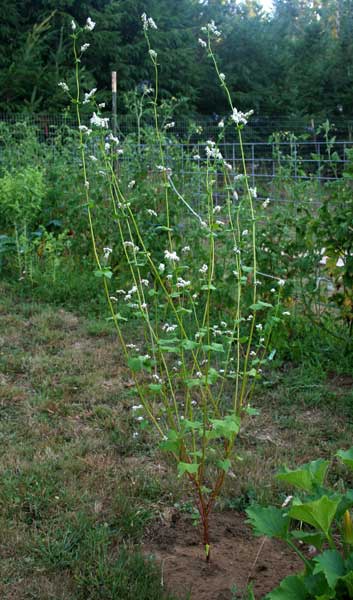 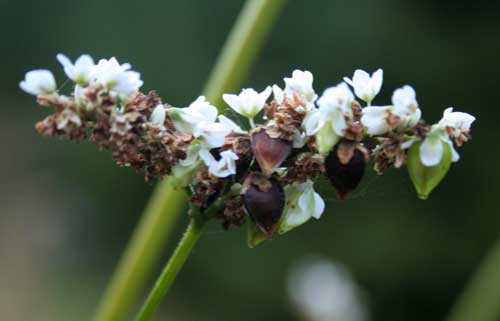 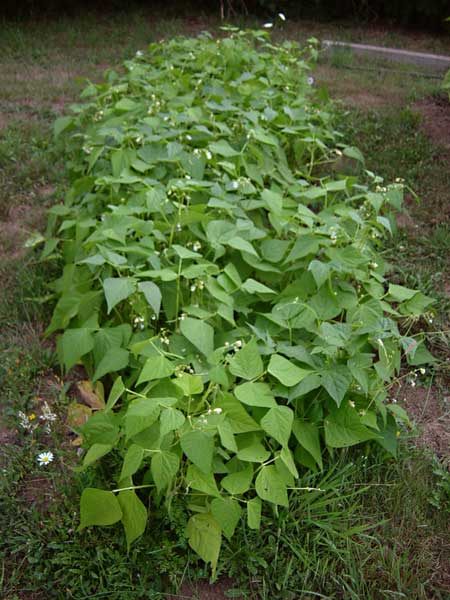 Their flowers and tiny beans-to-be: 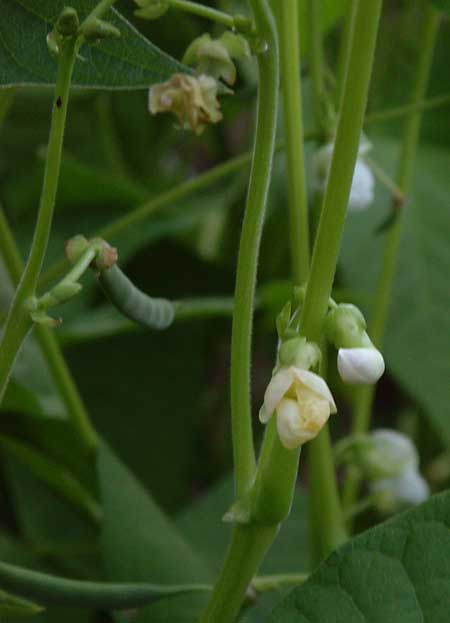 Another new one for us is sweet potatoes. This is two plants that have grown slowly but steadily for several months now without covering much area?I’ll be so happy if these work at all! 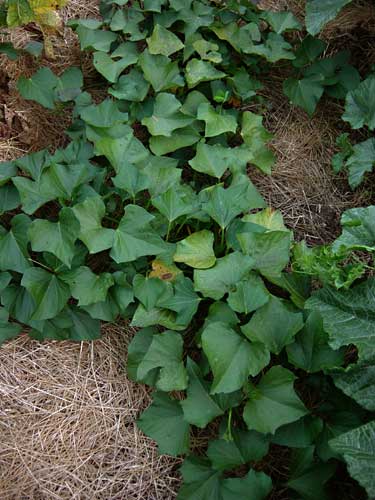 Some plants we’re feeling pretty competent with now, so we plant something approaching the amount we expect we can use. In the case of zucchini this means two bushes, but we’ve got four of them out there.

There’s a whole world under the zuke/delicata canopy: 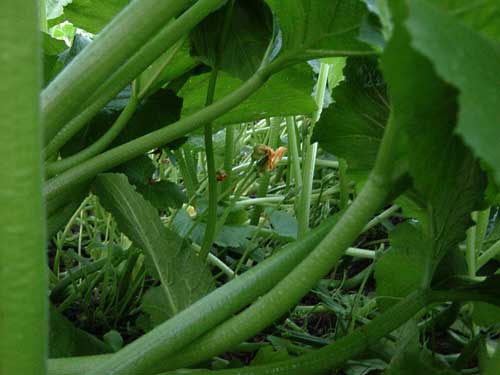 Tomatoes do fine here, though it’s sad in the Fall because they’re quite willing to keep producing right up until the first frost strikes them down. Here’s a beautiful Brandywine, the meaty heirloom variety we like for its hardiness, flavor, and texture: 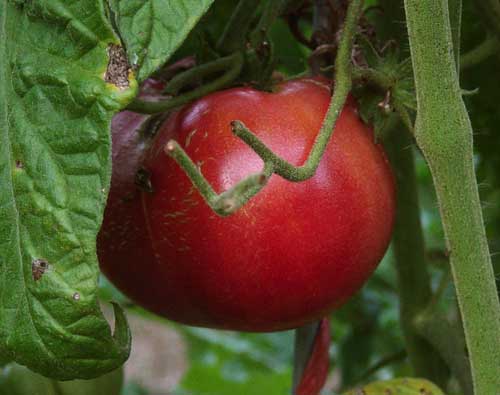 We usually try to stick to heirloom varieties that we can propagate ourselves in subsequent years, but the hybrid cherry tomatoes are kind of irresistible, and produce an amazing amount of sweet little globes in a few square feet: 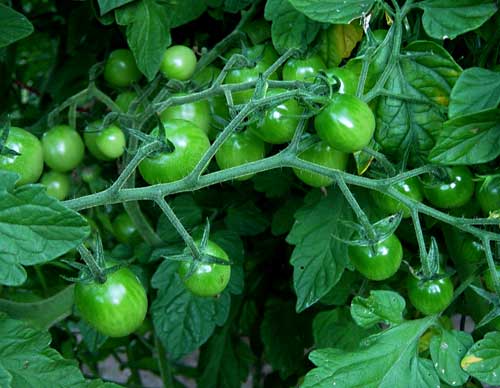 Black oil sunflower seeds are a big staple food for our chickens and goats, and they produce multiple flower heads?I think I counted 9 or 10 on this stalk: 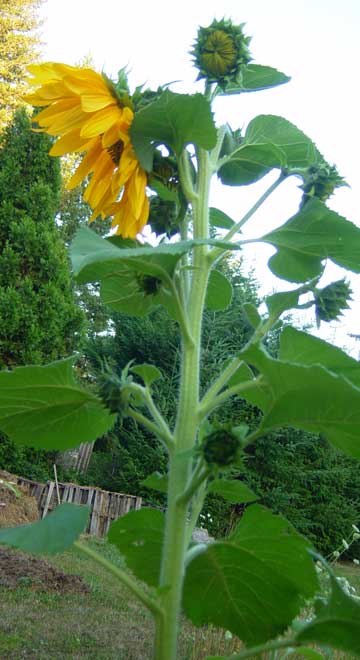 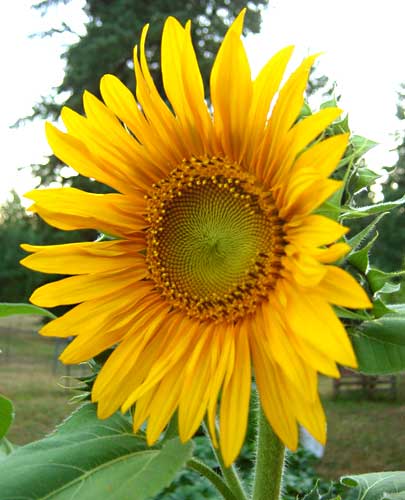 Fairy tale (miniature) eggplant, more of a late-summer treat than practical food source, but WHAT a treat they are on the grill with olive oil on top and applewood smoking them from below! 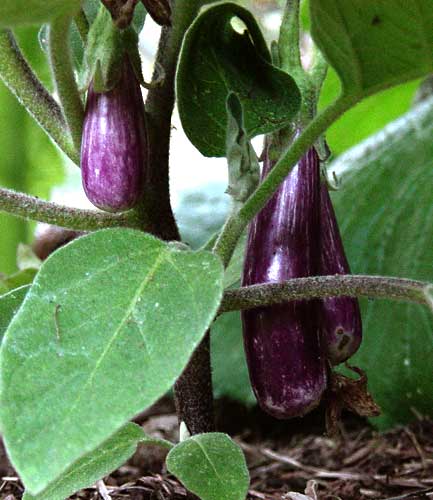 This Summer’s “Perennial plant that the chickens have failed to destroy despite their tireless efforts to dig it up” award goes to the horseradish: 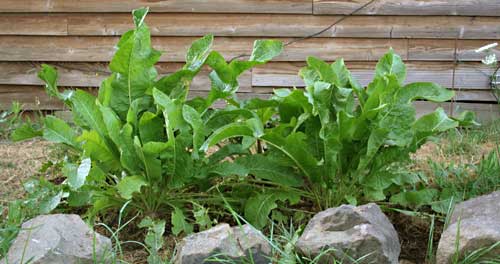 Calendula growing among the cherry tomatoes: 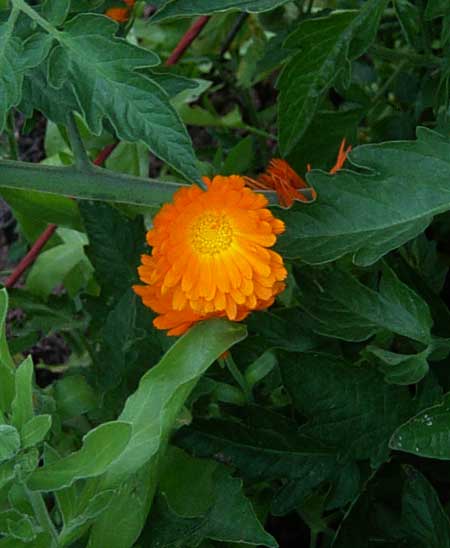 and finally, as promised, here’s Drama Queen, who is full of little baby goats (due in about three weeks) 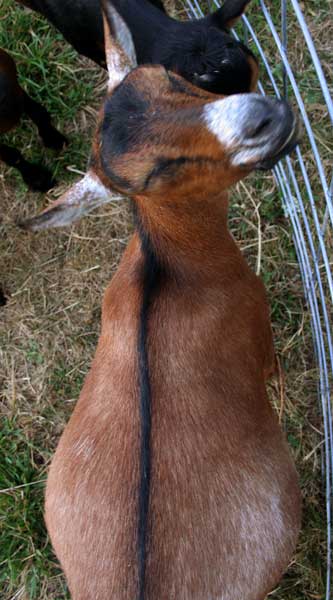