There are a lot of blackberry bushes around here – I foresee picking gallons of the things in another week or two. In order to take full advantage of this sudden bounty and others, Teri and I are learning about canning and other methods of food preservation. Between a yard sale and the Salvation army, we got a boiling canner AND a pressure canner for $10, and we already have a load of jars Teri spotted on freecycle =) 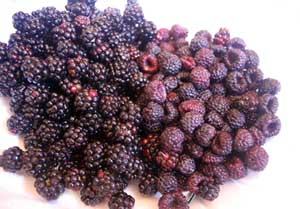 Yesterday I picked about a quart of blackberries (left) and another of black raspberries (right), which are probably the most delicious fruit in the known universe. 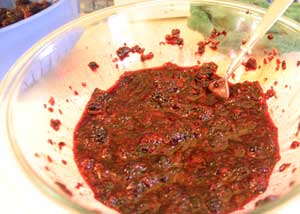 Made mashed berries out of them… 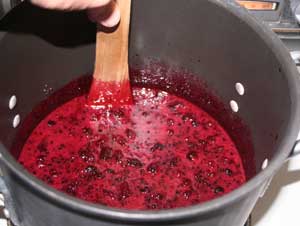 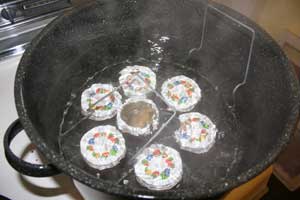 And finally put the tops on the jars and submerged them in boiling water for ten minutes, because we don’t like botulism around these parts. 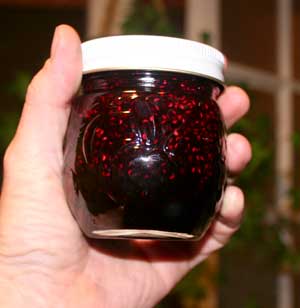 …and the final product! A few hours after the first batch, when it was barely jelled, Teri and I ate almost a whole jar of it. It is berry crack whether on bread, crackers, or the end of a spoon. Sure will be welcome in the middle of the winter!
Local, fresh food just tastes so much better – I almost don’t miss the incredible variety of ethnic foods back in NYC.

We haven’t bought a loaf of bread in months – because we found a freecycle bread machine and have been doing all kinds of experiments. Our staple bread is whole wheat with a bit of rye, local blackberry honey baked in, dry goat milk for the milk part and coconut oil for the shortening.

Teri’s been making soymilk, but that’s a bit time-intensive so we still buy some from the store. But unsurprisingly, hers tastes much better and costs a small fraction of the price of the stuff in the cartons.

Next post, maybe one or both of us will try to explain where we’re going with all this “Grizzly Adams” stuff…