After a few weeks of mild weather, today dawned chill and rainy. I stayed inside for a while, but then had to just go “look at” the goat house. About 8 hours later, I had cleared several hundred square feet of thick old blackberry brambles. That’s the sort of thing we do for excitement out here, you see. Now I’m satisfyingly exhausted and enjoying fresh banana bread (Teri) and oatmeal cookies (me).

The whole reddish area in this picture was a tangled net of blackberry vines, mostly dead ones. It was about as tall as me, and to get the scale of it, you have to know that the white square is a bathtub that was hidden in there. (background mosaic-ed out to preserve neighbor’s privacy)

Yesterday, I created and placed the roof beams for the goats’ house. They’re the only part of the structure made of purchased materials (aside from some screws) . I want it to be really, really solid in case one of the 30 foot limbs from the tree above the house falls.

You can tell I did more work on it – there’s another empty beer container resting on the beam. 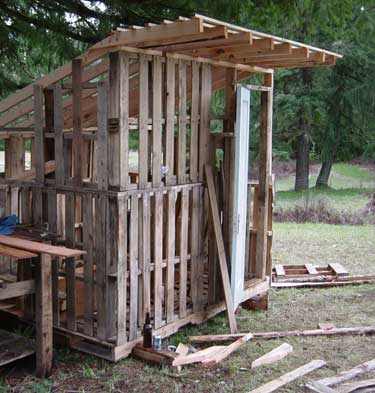 2 thoughts on “Room for ruminants”