Daks and Drama Queen ponder the changes in their relationship*

Daks and I just had a wonderful weekend attending a stock dog training clinic run by Brian Abingdon, a breeder and trainer of prize-winning Border Collies. Daks’ exact ancestry is a matter of speculation, but eveyone agrees that he is mostly Red Heeler, also known as Australian Cattle Dog.

This breed is famous for their intelligence, endurance, and ankle-biting ? and Daks is no exception. The phrase you’ll hear about them most often is “they NEED a job to do.” Without a few hours of active outside time every day they turn into fanged tornadoes.

Daks was the only mutt in the class, and I know almost nothing about all this stuff, but everyone was extremely friendly and encouraging, sharing helpful tips and stories, and I’m already looking forward to attending the next clinic in August.

We all pulled up folding chairs with a view of a 70′ square arena, and Brian brought each dog/person pair in separately for 10-15 minute sessions of 1-on-1 training with three extremely patient goats. The advanced dogs were quite inspiring to watch, and every moment was absolutely packed with things to learn about how herding dogs work. 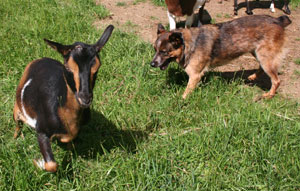 Nikabrik getting into
the spirit of it

Despite the relaxed, friendly atmosphere, I was nervous bringing Daks into the arena for his first session. Would he completely ignore me? Nope! Maul a goat? Nope! Stop to poop in the middle of it with everyone watching? Oh yes indeed.

The first task with a complete beginner is to get the dog “hooked in” ? ie, get him interested in playing with the stock and activate his herding (really hunting) instinct.

Unfortunately, Daks has had a year and a half of us chiding him for chasing goats, so he was a bit inhibited, but with encouragement you could see the instinct kick in as he began to race around, nudging goats with his shoulder and moving a reluctant buckling around by the extremely effective method of dropping his head and pushing on his nutsack(!) 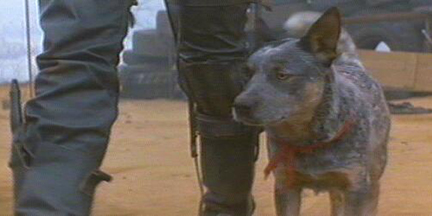 The training method is very different from what I’m used to.  When teaching a dog to sit, or come, or give paw, you can show him what you want him to do and reward him with a treat when he gets it. With the stock dog training, it’s their natural inclinations that get them moving, and early training seems to be largely a matter of giving the command for whatever he’s already doing (assuming it’s something desirable!), eventually building up an association in his mind between the sound and the action.

That may sound like a very slow process, but after a total of less than an hour in the arena, Daks began to understand “go get the goats” and even “bring me the goats.” The whole way of working with the dog was wonderfully intuitive and made it seem as if he was starting to read my mind. I would recommend this training (and this trainer) to anyone with a herding dog ? even if you don’t have livestock and just want to learn how to work with their particular traits.

One caveat: I was repeatedly warned that once these dogs have the instinct activated, small animals like chickens are at greater risk of becoming dog snacks. Daks is so far fine, still gentle and protective with the chickens, but we’ll be keeping a closer eye on him for a while?
* This is actually an old photo I recycled for this post, but it seemed very fitting; Drama Queen is a tough girl and Daks is still very reluctant to try anything on her.