Sunday the 3rd of Dec, we set out from Bear Lake in a medium-thick flakestorm.

Not wanting to drive in the falling snow on an empty stomach, I bought an egg mcmuffin-type thing at a convenience store. The greasy mass slid down easily, all the ingredients sharing a single rubbery texture that can only be achieved through microwaving and a few hours/days/weeks under a heat lamp. Gods only know what was in it, but there seemed to be some caloric content and dizziness was prevented, if at some cost to my digestion.

We wound along for several hours, not getting much above 40mph on the white-coated roads, and in Traverse City, at 223 W. Grandview Parkway just off Union Street, I spotted a sign reading “Home Grown Organic Eatery”, and thankfully another one reading “Open”. With an inch of snow in the parking lot, the quickest way into a parking space involved a twitch to the left and a tug on the ebrake. My inner teenage gearhead was very pleased when our little house whipped around in a neat 90 degree arc and stopped in perfect alignment.

The food wasn’t cheap, being all organic, but it was worth every penny to get two breakfast sandwiches with scrambled eggs, tomatos, and avocado on good solid bread. They even found a sample pack of real Chai tea for Teri, earning no small amount of gratitude.

Well-nourished, we continued on to Route 75, which was completely obscured most of the way under a haze of snow. Visibility dropped to a few hundred feet in places, and though we putt-putted along under 50mph most of the way very few cars passed us. For some reason, those that did were almost all pickup trucks with no lights on – presumably driven by fatalists or maybe just people who skipped the “brains” line.

Trucks and RVs were warned not to exceed 20mph on the bridge, and we decided that the same rule applied to blue VW bricks with roof pods. Once over the bridge and officially in “Yooper” land (Upper Peninsula = U.P. = Yoop), we took Route 2 West along the stunningly beautiful Lake Michigan shoreline, stopping a few times for photographs and fuel. The sun coming down on the bay through fluffy clouds made every glance to the left seem like the cover of an inspirational calendar, beams of god-stuff cutting through the sky and splashing golden sparkles on the water. 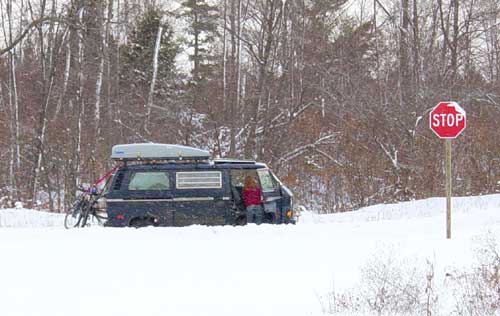 About 9 hours after we departed Bear Lake, we arrived in Bark River, where we’ve been staying at a beautiful farm with some wonderful people. Walking the dog in the fifteen-degree cold a few minutes after our arrival, I heard an eerie but awe-inspiring sound – the howls and yelps of coyotes in the distance. Such a shame that Ceili has gone deaf; it would no doubt have been very exciting to a city dog like her. 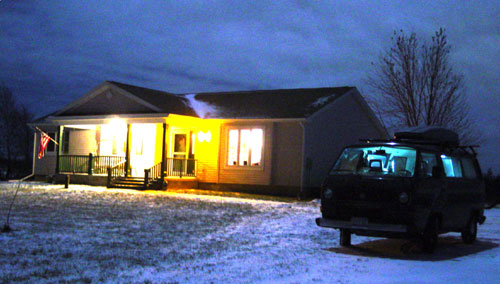