Many heartfelt thanks to everyone who commented, emailed or called in response to Wayne's passing. It's been a rough year for us with our animals – we miss all of our recently departed critters dearly. And now, it's time to move on. Sorry for the long wait between posts – I'd wanted to leave Wayne's post at the top for a week or so, but incompatibility issues between my Mac, our satellite internet, and the WordPress software lengthened that time-frame considerably. We've got lots of posts saved up on what we've been up to, but in the meantime, here's Peter and I at the Oregon Country Fair in mid-July – a three-day festival of phreaks and hippies, music and art and good food and performance, all taking place on 280 wooded acres in Veneta, about 10-ish miles from where we live. 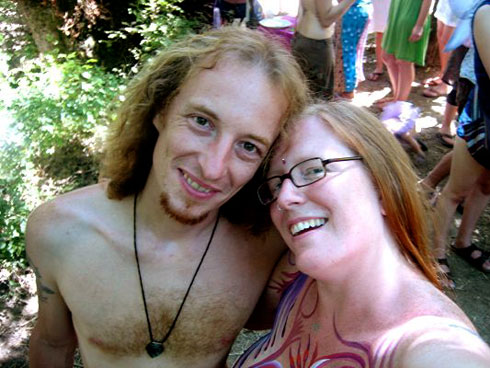 (Yes, my chest is painted, and yes, it's bare apart from the paint – a Fair tradition for many. The artwork on my breasts was created by a lovely and talented woman, and is beautiful.
More posts coming soon…

So we’ve been puttering along, living half in the 21st century and half in the 18th. No more of that!

We’ve traded the Beetle for a donkey named Cantankery. He’s only got one eye and he limps a bit, but if you pull really, really hard and hold out an apple he can sometimes be made to move. The best part? Instead of putting $3.50/gallon gas into our vehicle, now we put in grass and gas comes out the back…for free!

Some fool traded me an old buckboard for the Vanagon! Teri has some equine experience, so it’s her job to harness Cantankery to the wagon. I’m sure the next try will be successful, and I assured her that the hoofmarks will fade with time.

The whole flush toilet thing is just wimpy, even on those mornings when the seat is 30° because we let the fire go out. We’ve replaced it with a shovel and a copy of “How to $#!t in the woods“. Fortunately we have an endless supply of fir tree cones already.

Computers: no more Windows, no more Linux, we’re switching to using a bead-based system. Especially difficult computations will be done using a lump of charcoal to write on dried leaves. Not too sure about this one though – I think I got Grand Theft Auto installed on the abacus, but the framerate is miserable and I keep getting carjacked waiting for the screen to refresh. Oh well, still better than Windows Vista!

Bedding: we’ll miss the 10” thick futon mattress, but have carved out a nice little den in the duff under some blackberry bushes. This required a few minor skirmishes with the critters who were already nesting in there, but rabbit-burger, as it turns out, is quite tasty!

Beer: ahh, nectar of the gods, but not local…having discovered that pretty much any organic matter can be fermented, we’ve devised a system to make wine out of poison ivy and last year’s mushy, brown, leftover apples. It’s just like a tropical drink – who gets the worm?

Clothing: goodbye to cotton, polyester, and wool – we’ve planted a fig tree; there’s apparently a long tradition of using their leaves to cover the More Tender Parts of the body. I have some concerns about the large snake under our apple tree, but he only talks to Teri anyway.

Running water? Bah! How lame, with a river just a few hundred yards from the house. All our water will now be carried in buckets, and you know what they say – “If it’s still liquid, that’s yer hot water.” This is Teri’s job, because I want “Woman strong like bull, good for pull plow.”

Finally – communications. This will be our last web-based blog post. In the future, we will be using smoke signals, so you will need to visit one of the nearby mountain peaks to read the blog. We’re not luddites, though – we’ll be using that new-fangled “Morse Code” for our posts. Images will all be encoded in GIF format, since that is easier to represent in text. Image dimensions will be in the header, so you can use a piece of graph paper to reproduce the image by filling in the appropriate squares.
Happy April first!