When I got up at 3am to check Drama Queen’s progress, the two ligaments to either side of her tail had gone completely mushy, just as Goat Health Care said they would…this usually means delivery is coming in a matter of hours (up to 24).

There was no vaginal discharge yet, so I went back and grabbed a few more hours of sleep. Now it’s a little after 9am and Drama is showing more signs of labor; pacing around, talking more than usual, and pawing at the bedding.

She’s still interested in alfalfa and warm water with apple cider vinegar (always a big hit in cool weather), and more interested in petting and scritching than usual.

Teri and I will be taking turns checking on her, and tonight we’ll probably be posting photos of goat babies!

Here’s Gimpy the turkey looking a bit happier…she’s clearly much perkier than when she came here, perhaps because I spent the day making a little rainproof yard for her where she can get sun and air but be safe from dogs. 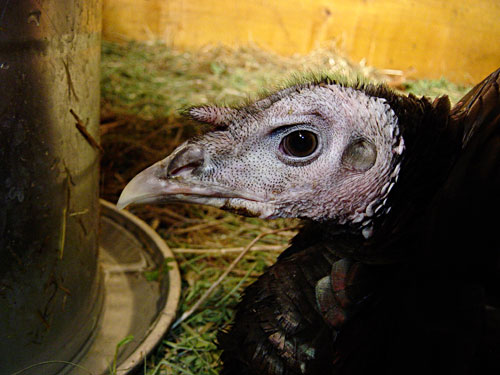 You can see here why the breed is called “bronze”: 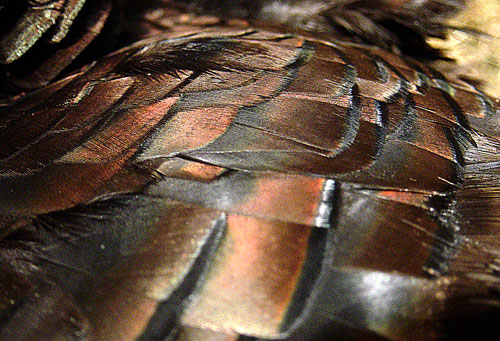 Next year we expect to produce all of our own milk, cheese, and eggs here on the property, in addition to a much larger portion of our fruits and veggies.

It’s also likely that we’ll raise chickens or turkeys for eating, so a while back I volunteered to help with the chicken “processing” (killing and cleaning) at a friend’s ranch, as much to take measure of my own determination as to learn the skills involved. The skills have already come in handy!

The Saturday before Thanksgiving, I was perusing the local Craigslist, and found someone offering two free Bronze turkeys. They were aging (the larger domestic turkeys don’t age well), and she didn’t want to kill them herself.

The turkeys lived with chickens in a nice place just outside of Eugene. I liked the woman and felt that she cared about their welfare and was a fellow aficionado of “clean food”. These were turkeys I’d feel OK eating…well, one of them. The bigger one was a tom (male), and blind in one eye because chickens can be really mean. He was enormous and healthy, and ended up being our Thanksgiving bird. His name? Thanksgiving. That’s him at the top of the post.

The other bird…she’s a sad case. “Improved” (intensively selectively bred) turkeys become so heavy so fast that they are often crippled just by their own weight. “Gimpy” isn’t as big as Thanksgiving (who must’ve been 30 lbs), but she has a deformed right leg and can only get around with a lot of lurching and flapping. The chickens saw this weakness, and began to peck her to death. They removed maybe a quarter of her feathers and left her with a multitude of raw wounds by the time she came to live with us.

Our accidental pet turkey looks pretty unhappy in this picture taken the day she came home, but she’s perked up now. “Gimpy” originally escaped the butcher block because she just didn’t look healthy enough to eat. But something happened; as our neighbor put it, she “seems to want to live now”, so she’s a resident here for as long as she is satisfied with her life, though determining a turkey’s quality of life is guesswork for us. Away from the hectoring hens, she’s become more bright-eyed and energetic, and every morning we transport her by wheelbarrow from the predator-proofed henhouse to a grassy pasture where she can lurch about, eating bugs and grass and frustrating the hell out of our dog by her inaccessibility.

The rest of the post will be about butchering the big male turkey, and you have to click “more” to see it. But here’s how it turned out – home-processed turkey, homemade cranberry sauce and squash from Teri, fresh baked bread, and (of course!) a pumpkin pie brought over by a dear neighbor who we shared the holiday with. Note the “store boughten” beer – something we’re working to phase out, but if you have to buy them, the Deschutes Brewery ones are all really good. If you’re a vegetarian, you might find the rest upsetting. If you’re not…well, this is the reality of meat, and it’s far more humane and hygienic than what happened to that “free-range organic” supermarket bird you probably just ate.