We have a family of wild turkeys that likes to hang around our yard. They started coming last spring, momma and five babies. A month or so ago, one got run over on the highway in front of our house, where idiots whip through curves at twice the posted limit. Another disappeared some time in the past few days, but hopefully that means that the remaining three are a little smarter about cars and will pass that trait on.

I will NOT be hunting these turkeys – no gunfire allowed on our land except in case of emergency, and we like having them come around. A nearby rancher friend has invited me to hunt on his land, where wild turkeys are eating food meant for his livestock, so hopefully Thanksgiving will be extra authentic this year. I sure hope so – the “tag” required to legally harvest one turkey cost $18, and it will take me a couple of hours to de-feather and process it.

Possibly some of our city friends will be a bit appalled at the idea of taking a 12-gauge and blasting a poor innocent turkey, but my point of view is that there is no more humane, healthy, and sustainable way to procure meat. Our Thanksgiving turkey will have led a full, normal turkey life out in nature, rather than getting overfed in some stinking little cage somewhere.

This video is probably from April (2008)

My motorcycle helmet gets used more to protect from wild animals than for riding these days (though I’ve picked up a nice Yamaha 400 that should be on the road soon!).

Two weeks ago we had a rabid bat doing his rabid bat thing – coming out into the light and viciously hissing and snapping at everything and nothing, not really flying much but getting around a bit. I put on my helmet and gauntlets and dispatched him with an arrow through the head. Later I read that you should always preserve the brain intact for rabies testing. Oops – but I couldn’t leave him around our goats, not to mention us.

Just a few minutes ago I heard Teri shouting to Daks that “it’s OK”…he was out on his line, but wrapped around a big fir tree and pretty much stuck in one place, totally freaking out. Assuming that he was just upset at being confined, I went to free him. The yellowjackets got me in the head and face, and I retreated quickly, but hadn’t gotten the leash off Daks. I ran and put on my motorcycle helmet and gauntlets and freed the dog.

We brought him in, but he was still freaking out, and we found that there were yellowjackets in his fur, apparently still stinging away. We removed about five of them, and I swatted a few more flying ones. Then he found the “secret passageway” from the mud room to the space under the house, and wouldn’t come out. Once again I donned protective gear (cornered, terrified dog in pain = chomp) and crawled under the house. I managed to lure him out, and now he’s in his crate, very agitated and biting at his butt.

To top it off, one of the little #$%ers was still on the back of my head, tangled in my hair and stinging away. He got me a few times in the same spot before I realized it and whacked him, and there’s a big, aching lump growing there.

And oh, yeah – our refrigerator seems to have died this morning, and I’m tethered to the computer for work so I can’t go get a new one. The van’s little frig is saving our dairy products.

I think I’ve about worked up an appetite for breakfast now.

Around 10am, I was working at the computer and heard a loud “POP!” out by our telephone pole, and all the electric went down. The electric co-op got a repairman here very quickly, and he extracted a fried squirrel from the transformer by our house. I’m afraid it’s the one we were getting friendly with, who would steal sunflower seeds from the shed when he thought we weren’t looking. I buried him in the yard, hope it’s not the one we were befriending.

Since our driveway is overgrown a bit, I had to trim a few small branches for the electric guy to get his truck in. The goats were VERY happy about this: I’ll start you off with a wildlife photo (and I promise, it gets prettier as you progress through the post)…a spider wrapping up a buzzing fly: 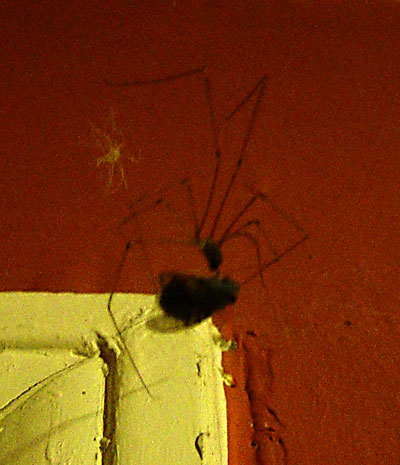 Letting the spiders live happily in some corners helps with the flies…but the really scary looking ones get put outside.

While we’re on the topic of food…we finally tried cooking something on the woodstove, and frankly it worked much better than our electric stove: 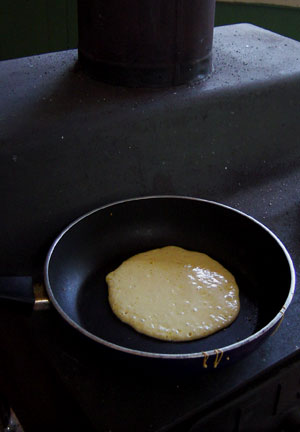 Here’s a scary/lucky sort of thing; this is a fuel line with a big split in it…a split that was sealed up by a giant icicle! I went to replace the line and when I splashed warm water on the icicle, gasoline started spewing out. Moral of the story: do not wait till your car is in her mid-30s to replace all the fuel lines. 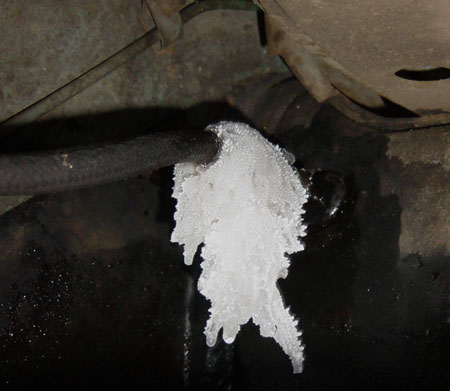 Last night I tried making Challah bread from a bread machine recipe…well, it was yummy, and pretty, but I’ve got a lot of R&D to do before it remotely resembles a proper Brooklyn bakery loaf: 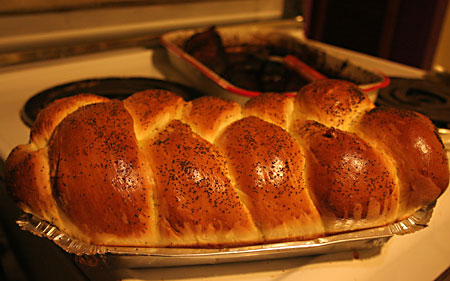 Our silly red monster truck got a fun drive up the logging roads today. She’s so at home up there: 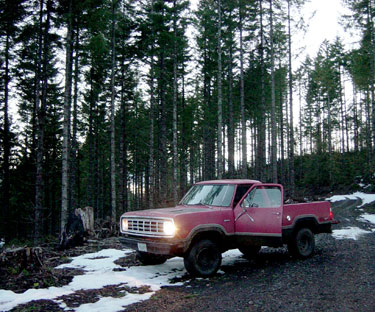 Eugene’s lights twinkled in the distance: 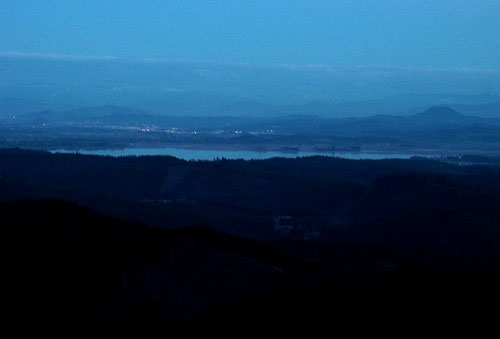 And to the North East, the rising moon appeared to be occluded by a cloud…but actually it was starting to eclipse already: 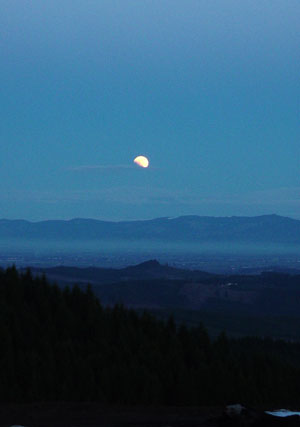 These last two eclipse photos were take about two hours later, from our orchard, as the moon began to reappear. Full disclosure: the darker photo is a composite of two bracketed exposures; my digital cameras don’t have the range of Kodachrome…sigh… 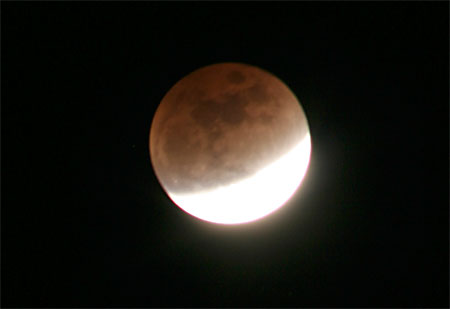 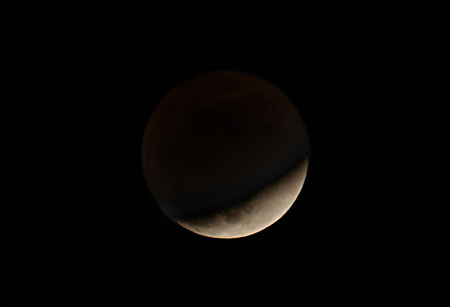