First, I notice that there’s a big pretty bird in our yard, that I’ve never seen before. He’s so distinctive that I have to try to identify him. Thanks to my handy-dandy Audubon Society Field Guide to the Pacific Northwest, I can pretty confidently say that he (along with his partner, who showed up later), is a Northern Flicker, part of the Woodpecker family. Since I’m still avoiding studying, I decide that I would be remiss if were to miss this opportunity to get some photos of the pair of them. (Notice that the male has the red spots on his cheeks – the female’s coloring is similar to the male’s, but she lacks those red spots.) 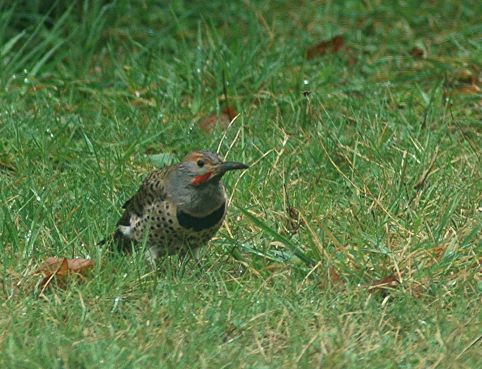 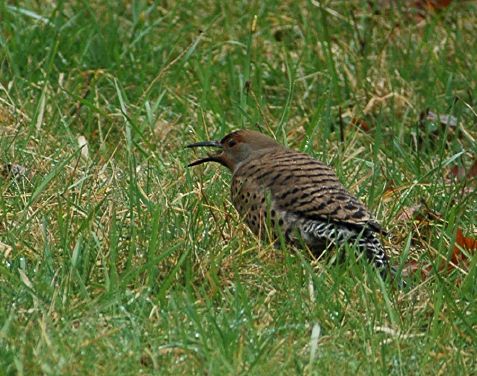 Next, I remember that Peter had separated the cream from our latest jar of fresh raw cow’s milk (if you missed it, he posted about our first raw milk tasting and the local family farm that’s supplying us here), setting it aside to try our hands at butter-making. Suddenly it becomes quite urgent to get the butter made today – so I pull the mason jar from the fridge and start shaking. And shaking. And shaking. When my arms start feeling like they’re going to fall off, I take a break. By this point, what I have in the jar is whipped cream. So I shake some more. And some more. And some more.

And then, whadda ya know! The curds (the chunky bits that will become the butter) begin to separate from the whey (the liquid). This is what it looks like: 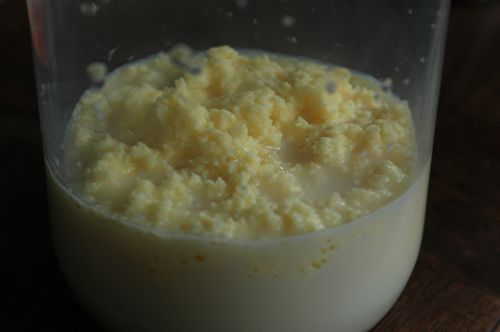 This inspires me, so I keep on shakin’. Pretty soon, I’ve got a pretty good chunk of butter in the middle of the whey (the jar is tipped on its side in this photo, to better see the almost-butter): 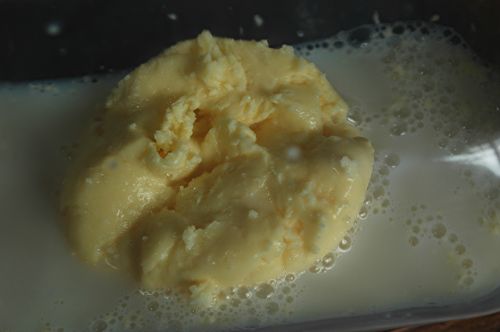 I drain off the liquid into another jar, and keep shaking for a few more minutes – the shaking is what’s separating the liquids from the solids, and I want to make sure I’ve got all the liquids out. Next, I put the hunk of butter into a bowl, and rinse it with cold water, “massaging” the butter with a spoon to squeeze out the last of the milky liquids. I keep rinsing with fresh water until the water remains clear.

Here’s what we’ve got: 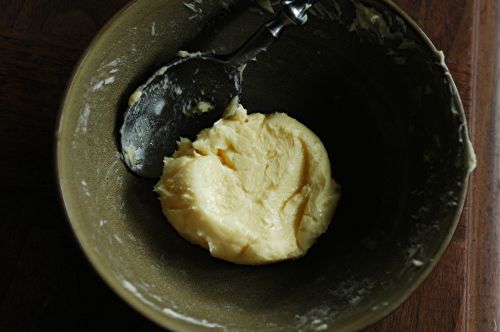 And here’s the finished product put away in a jar, along with our approximately 1/2 cup of buttermilk! (I think I may see buttermilk pancakes in our future…) 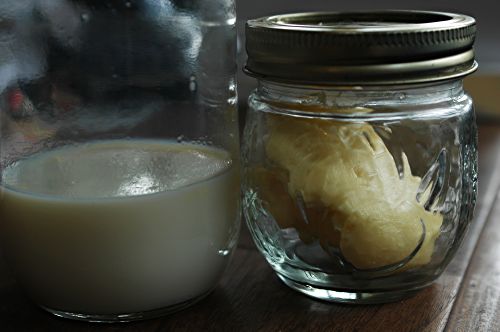 Of course, I now realize that in order to fully appreciate our first-ever batch of homemade butter, we’ll need some fresh hot homemade cinnamon raisin bread, so I move on to bread-making.

And since I’m still avoiding studying for finals, I decide that now would be a good time to tell ya’all about our first-ever batch of homemade ginger ale. I’d found the recipe a few weeks ago, but we hadn’t gotten around to trying it – until Peter got inspired and I came home the other day to a freshly-bottled batch (ignore the labels – we washed, sterilized, and re-used old soda bottles we had saved for this purpose). 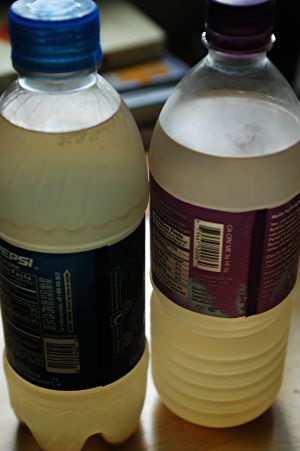 It’s actually pretty easy to make: simmer chopped-up ginger root and sugar in a pot of water for about 30-60 minutes (the longer the simmer, the stronger the flavor), then remove it from the heat and strain out the remaining ginger pulp, add more water and let it cool. After about 15 minutes, add brewer’s yeast and let it sit for a few more minutes, then bottle it up! You just need to keep an eye on it – once it’s carbonated, put it in the fridge to stop the process. **Peter added a bit of cayenne to this batch as well, to give it an extra kick.

One of the best things about the homemade brew? We control the amount of sugar we use – and much of it is eaten up by the yeast. And the waste products of the yeast? B vitamins! With less sugar and actual nutrients, it’s not only tastier – it’s way healthier than the store-bought stuff. 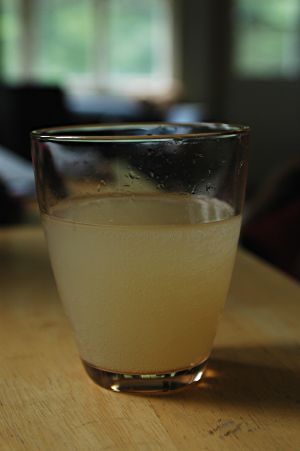 And, now that I’ve enjoyed a bowl of Peter’s homemade stew (made with locally raised goat meat), a slice of homemade raisin bread with homemade butter and a glass of homemade ginger ale, stacked a large pile of wood as Peter did the splittin’, and written up my quiet country day, I think it really is time to turn my mind to studying.

2 thoughts on “What I do, when I’m avoiding studying for finals…”