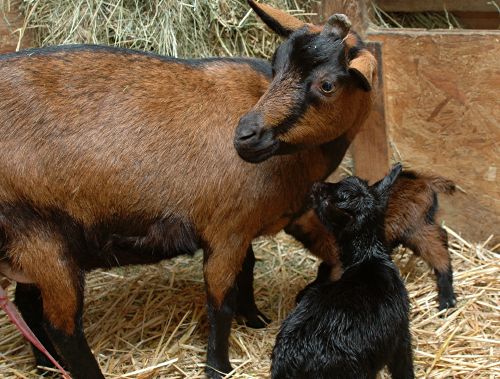 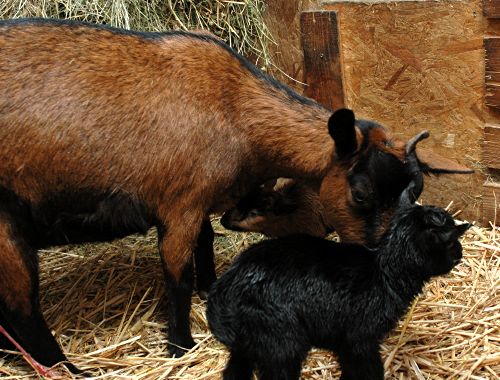 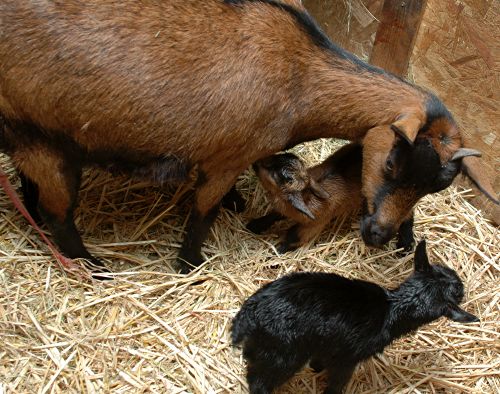 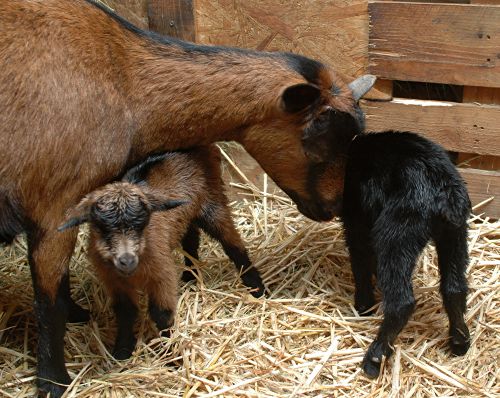 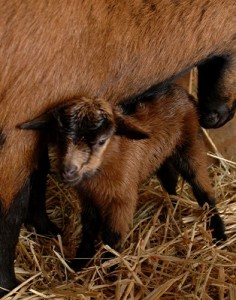 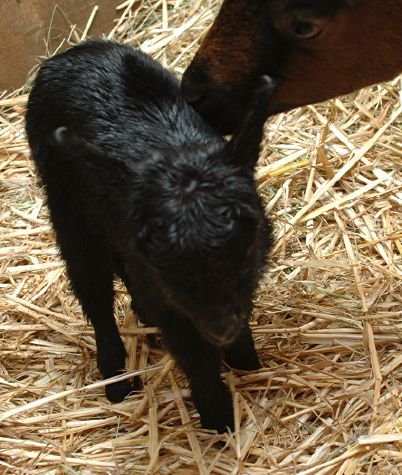 Two little doelings, one black and one bay; born at about 5:15 or 5:30 this morning. The black girl came out first, frank breech (butt first). Zoe was a trooper – that couldn’t have felt good! It took us a minute to figure out what we were seeing – most often the kids come out in a “diving” position, front feet and head first, so we were looking for a pair of hooves and perhaps a nose. When we first saw a “blob” with no hooves, we thought we were seeing the head and that the front legs were bent back. In that case, it’s important to gently reposition one or both legs so that the baby doesn’t get stuck at the shoulders. So, I scrubbed up, lubed, and (gently!) went in. I had to feel around for a minute to realize that what I felt was not the head, but the butt. Meanwhile, Zoe was still pushing, but the baby seemed to be stuck at the vulval opening. While Peter held Zoe and encouraged her, I used my lubed hands to gently help her vulva open wide enough for the baby’s big butt and back legs to make their way out.

With a breech birth, there’s more of a danger of the baby aspirating some of the amniotic fluid, so as soon as she was fully out we moved quickly to clear her mouth and nose of any fluids. Then Peter held her up by her back legs and (again, gently!) swung her back and forth. This is a trick we learned from our friend and goat mentor to ensure that any fluids that may have entered her lungs are drained back out. This all happened in the space of only a minute or two, and immediately after we plunked her down on a towel in front of mama Zoe, so she could get down to the business of cleaning off her new daughter.

While Zoe licked and cleaned and Peter towel-dried the newborn, I turned my attention back to the two little hooves showing at Zoe’s back end. They were back hooves, meaning that this baby was coming out footling breech (back feet first). So, this one would also need to be “swung”. She came out smoothly, a tiny little thing, and we once again worked quickly to get her mouth and nose cleared. But we couldn’t swing her – her umbilical cord was thick and twisted around and around on itself, and only a few inches long. It had not broken or separated on its own, so she was still attached to her mama’s insides. Did I mention it was only a few inches long? We couldn’t move her, couldn’t swing her, couldn’t even get her out of the now chilling puddle of amniotic fluid in which she was laying. I held her and rubbed her vigorously to try to warm her while Peter grabbed dental floss and scissors from our birthing kit. He used the floss to carefully tie off her cord in two places, and then cut the cord in between. He immediately swung her to clear her lungs and placed her on a clean dry towel in front of Zoe. Zoe went to work cleaning her up while we rubbed her vigorously with towels, both to get her dried off and to get her warmed up and get her blood pumping. At about this time we noticed that she was bleeding quite a bit from her umbilical cord, so we tied it off again, as tightly as we could.

It took a little while to get this second little girl warmed to the point where she was no longer shivering, but surprisingly, she was the first to go for the teat. She was determined to get her colostrum! Zoe didn’t know what to make of this at first and kept moving away, but once her little girl latched on and started guzzling away she settled right down.

We began cleaning up while we waited for Zoe to pass her placenta. While scooping up the sopping towels and fluid-soaked straw (birth is messy!), we also kept an eye on the little black doeling, who hadn’t yet nursed. Once we had helped her to find the teat and we saw that she got a good dose of colostrum, we packed out our birthing kit and garbage and brought Zoe some grain and alfalfa and a fresh bucket of hot water (Peter had already brought her a bucket of hot water with molasses immediately after she finished kidding; she sucked most of it down right away).

At this point all that was left to do was to dip each kid’s umbilical cord in iodine, in order to prevent infection. We poured our iodine solution into a pill bottle, picked up the first kid, dipped her cord into the bottle, and then tipped her over onto her back with the bottle pressed firmly to her belly. This ensures that the iodine coats the entire area. We repeated the process with the second kid, and then left mama and babies to rest and bond.

And, oh yeah – about that placenta? Zoe, smart mama that she is, ate most of it. What little bit she left went to the dog. Nothing goes to waste on the farm!